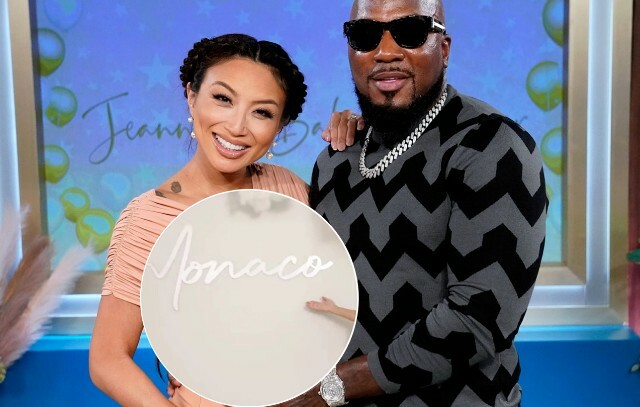 Jeannie Mai Jenkins is ready to share the name of her and Jeezy’s baby. The Real co-host shared the details of her little one’s name as well as the meaning behind the moniker during a recent episode of her YouTube series, Hello Hunnay.

Jeannie took viewers inside of Baby J’s nursery before revealing the little one’s name as Monaco. “I thought Baby J’s name should be a J name because obviously Jeannie and Jeezy, makes sense, but that wasn’t the name that came to us,” Jeannie shared with her YouTube fans. “What really came to us was how baby J came to fruition for us when we were dating,” The Real co-host explained.

Jeannie Mai and Jeezy took a trip to Monaco, France, during their courtship, which established their relationship. “[The trip] established what was going on for us,” Jeannie told her Hello Hunnay supporters. “That’s really the theme of the nursery: what Monaco is about,” the celebrity mom said in reference to Monaco’s nursery, which also has elements of the city. “Family, moments, traveling, discussions, important key points in my life and Jeezy’s life that brought Monaco here,” Jeannie Mai said.

Jeezy and Jeannie Mai welcomed their baby earlier this month. “I asked God for a life of love and happiness,” Jeannie Mai wrote on Instagram when announcing the arrival of her and Jeezy’s baby. “He sent me my family,” the talk show host said.

Monaco comes after years of Jeannie Mai expressing a desire to not have children. The celebrity explained how her relationship with her husband changed her perspective about kids during a recent interview.

“I just begin to fall into love with Jeezy that I had never experienced before,” Jeannie Mai told the press. “And this love opened up visions and dreams of things I wanted to do with him that I never pictured doing: building a future, building a family, building the type of childhood and the type of freedom and love that we didn’t always have as kids in someone new.”