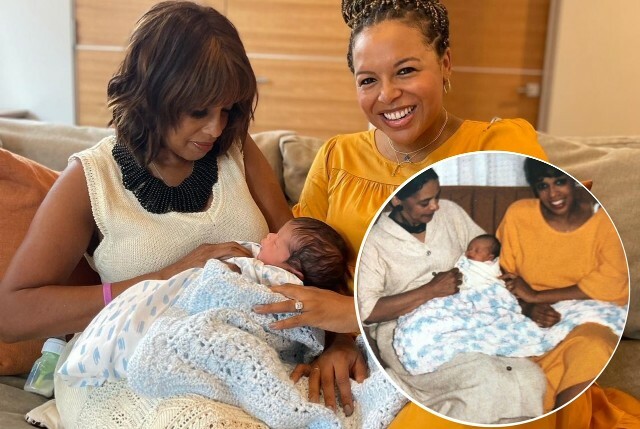 Gayle King and her daughter, Kirby Bumpus, recreated a special family moment during their recent photoshoot. Kirby recently shared the candid, which channeled Gayle’s 1986 photo of a baby Kirby, with her fans.

“1986 to 2021,” Kirby told her social media fans. “Luca, Mom, and I had to recreate this pic of my Grammy, my mom, and I shortly after coming home from the hospital in 1986,” Bumpus shared regarding the photoshoot. “I’m so grateful for these invaluable moments I’ve had with my mom over the last few weeks and get all the feels when I think about our new dynamic, along with Luca’s growing love and relationship with his Gaia as he grows up!”

Kirby Bumpus and her husband, Virgil Miller, welcomed their son, Luca Lynn Miller, in September. Gayle gushed about the newest addition to the family to her Instagram supporters. “Please allow me to introduce to the world Luca Lynn Miller,” King told her fans. “His middle name is Lynn,” the television personality revealed. “Virgil lost his brother earlier this year so little Luca has his uncle’s middle name,” the celebrity grandma explained. We already call, his initials are LLM so we call him LL Mill. LL Cool Mill.”

Gayle further celebrated her life as a grandmother by saying, “It’s really something when you see your own child become a parent. I am so nuts about it,” the television personality revealed. “I was holding him, Kirby was like, ‘You have to support his neck.’ I said, ‘Yeah, OK, I actually know how to do this.’ But I am so grateful.”

Kirby Bumpus and her husband made Gayle King a grandmother for the first time. Luca was an extra special gift to Gayle as the television personality did not have a brother for a sibling.

“I’m the oldest of four girls,” King said during an interview with Ellen DeGeneres. “My whole life I wanted a big brother,” the celebrity added. “I just saw that people with big brothers were lucky. So I always like a firstborn to be a boy, then the second one is a girl. Then you have a big brother that takes care of you. That’s just my own little fantasy.”