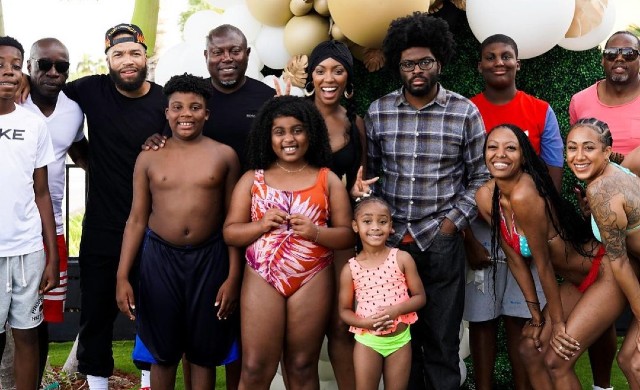 Porsha Williams and Simon Guobadia are planning to showcase their blended family in an upcoming family show. Porsha gave a few details about her upcoming Bravo reality series during a recent episode of Bravo’s Chat Room.

“So this ‘Family Show’ is everything,” Porsha told Gizelle Bryant and Mercedes “MJ” Javid. “It is a whole ‘nother side of me,” Williams added. “You will get to see a lot where my personality comes from, the family dynamic, the blending of it all,” Porsha explained.

“We also took the whole family to Mexico. Yes, everybody went to Mexico, and we went on this spiritual retreat. So my sister Lauren [Williams] is a spiritual guider [and] meditation goddess, and she was trying to bring some zen to the family while we’re trying to blend. And, um, yeah, let’s just say the trip wasn’t so zen, but you’ll see.”

Porsha’s news of an upcoming blended family series with her fiance comes after Simon Guobadia’s ex, Falynn Pina, announced her expectancy of a child with Jaylan Banks. Falynn dispelled rumors of her being near the end of her pregnancy with a separate YouTube Live video in which she told her fans that her stomach was still “just a blob.”

“No, I’m not eight or nine months pregnant,” Falynn told her supporters. “I am just a few months,” she added. “It’s still kind of blubbery,” Falynn continued. “It’s not a hard surface just yet. We’re just a blob right now, but it will harden.”

Porsha Williams broke the Internet a few months back when she expressed her love for Simon Guobadia in a lengthy Instagram post. Many were shocked by the post because Simon was still legally married to Falynn at the time.

Some accused Porsha of being a homewrecker as well as a bad friend to Falynn. The Real Housewives of Atlanta star, however, made it abundantly clear that she was not friends with Falynn and did not disrupt the Guobadia’s home as both Simon and Falynn were separated. Simon confirmed his separation from Falynn and even revealed why he filed to divorce his wife.

Simon accused Falynn of having an affair with Jaylan and being pregnant with her lover’s baby back in June. Falynn’s pregnancy announcement served as confirmation of her ex-husband’s accusations for some fans who quickly became critics of Pina. Fans will have to keep their eyes and ears open to learn when Porsha Williams and Simon Guobadia will debut their new Reality TV series.

LUDACRIS SHARES WHAT HE LOVES MOST ABOUT BEING A 'GIRL DAD'

LUDACRIS SHARES WHAT HE LOVES MOST ABOUT BEING A 'GIRL DAD'