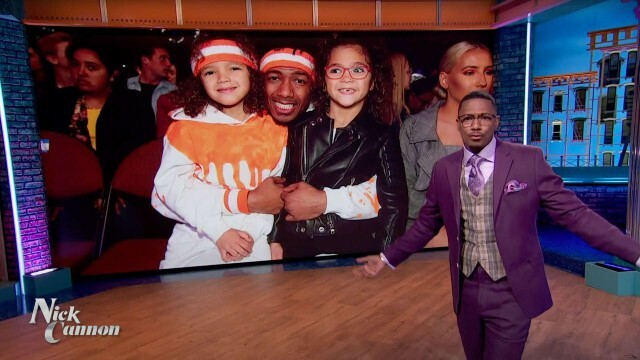 Nick Cannon gave his eldest son, Moroccan, and oldest daughter, Monroe, cellphones at just 10-years-old. The television personality recently told his viewers that his ex-wife, Mariah Carey, is still angry about the gifts.

“My oldest twins Roc and Roe wanted a cell phone at 8,” Nick said during a recent episode of his talk show, Nick Cannon. “I was all for it but Mariah was like, ‘Uh-huh they aren’t going to be Googling us, learning about all their new brothers and sisters, no we aren’t playing,'” Cannon said of his ex-wife’s response.

“I respected it at 8 but then we made a deal and said at 10 then they can have it, [but] Mariah still said no,” Nick further explained. “So at 10, I snuck and I still got them the cell phones for their birthday,” the celebrity father said.

“We had this amazing party with jump jumps, their friends came, it was so amazing,” Cannon shared in reference to the Monroe and Moroccan’s birthday party. “Then [when] it was time to open the gifts, I was like ‘I’m going to leave these right here and tell your mama I’ll be back,'” the celebrity father recalled. “Mariah is still mad at me till this day,” Nick told his talk show’s audience.

Monroe and Moroccan celebrated their tenth birthdays earlier this year. The youngsters were given extravagant gifts by both mom and dad to go along with the expensive items they already own.

It was just two years ago that Mariah Carey shared the story of her son purchasing a dog for $5,000 on his father’s dime, which Moroccan’s mom made him return. “My son is, like, a technological genius,” Mariah shared when conveying the story. “He ordered a dog the other day. He went with his father [Nick Cannon]. And they called him and they were like, ‘Your dog is ready.’ He’s like, ‘I didn’t order a d*mn dog.'”

Moroccan purchased the dog on his father’s spending account. Mariah Carey was sure to cancel the order. “The dog’s been canceled,” Carey revealed. “We have dogs, they have pets. They have fish. They have everything they need.”

Monroe and Moroccan are Mariah Carey and Nick Cannon’s children together. Nick has seven kids in all. Check your local listings to see when Nick Cannon airs in your area!