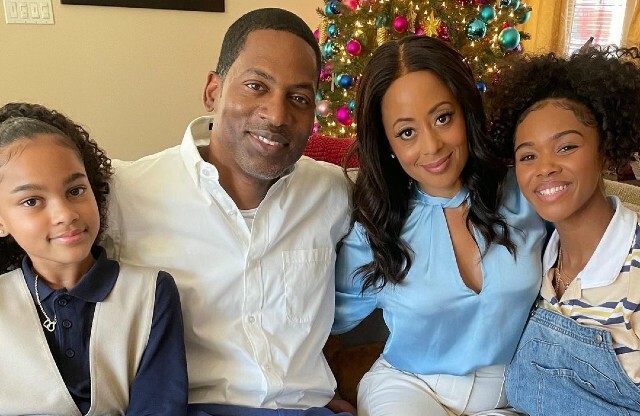 Bow Wow and Joie Chavis’ daughter, Shai Moss, is working on a new project that includes veterans in the industry. The youngster recently shared candids from her day on the job along with actress Essence Atkins who also shared an Instagram post from a day on set with Shai.

“I love what I do especially when I get to do it with kind and talented people,” Essence told her social media fans. “New project. New character. New blessings,” the actress shared. Atkins also uploaded a picture of herself with Shai along with footage that appeared to showcase the young actress as Atkins’ daughter in the upcoming film. It may also be safe to assume that the movie will revolve around Christmas as Essence shared a candid of cast members in front of a Christmas tree in what could have been the living room setting of the forthcoming film.

It is no surprise that Shai Moss is booked and working with experienced talent such as Essence Atkins. It was just a few months ago that the young star had several gigs back-to-back in the field of acting. Shai’s father has even alluded to working on a sequel for Like Mike, which led fans to request his daughter serve as one of the stars.

“I’m only watching if Shai is in it,” one fan said. “I’d love to see it,” another supporter added. “His daughter is naturally funny.”

Shai Moss has garnered much attention because of her upbeat spirit on TikTok. The youngster has also been featured on her mom’s YouTube series, Joie In Life, on several occasions. Every episode in which Shai is featured garners fans who are in absolute love with the rising talent.

“Shai is a whole mood,” one fan said in reference to Shai doing her mom’s makeup during a recent episode. “She is going to do great in anything she chooses,” the supporter declared. Another of Joie’s YouTube subscribers wrote, “Disney Channel give this girl a show! She’s a STAR.”