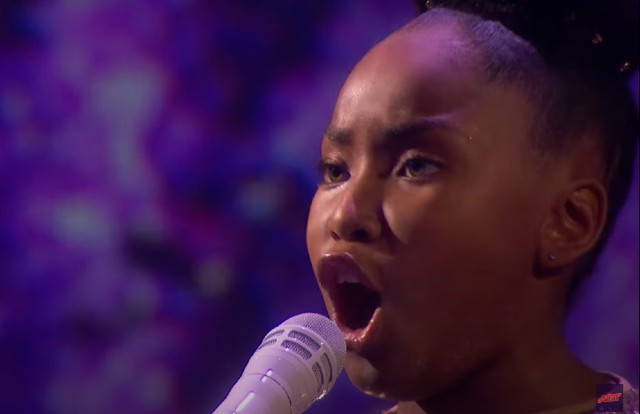 Victory Brinker did not disappoint on Tuesday night’s AGT. The talented nine-year-old brings judges to their feet during the semi finals performance of AGT. Brinker delivered a flawless performances and her voice was even more powerful and mind-blowing than any of her performances before.

“That song is like climbing the tallest mountain in the world and you conquered it, Victory. Good for you!” Simon said. “You know what I love about you? Not only are you talented, you’re fearless. And that’s what we need in the finals.”

“You are a star in the making, we’re so proud we found you!” Heidi shared.

Howie added, “I watch you and it doesn’t make sense to me! I watch you, this adorable little girl, and that sound coming out? You have a good chance of winning the $1 million.”

So, just who is the beautiful green-eyed girl with the powerful voice?

Well, according to her official website, Brinker is a classical singer who sings songs in 7 languages. She began singing at age 2 and discovered classical music at age 6, when her dream to perform was also born.

Victory has been blessed to perform all over the USA, appearing on NBC’s Little Big Shots, Wonderama, DreamWorks Trolls Video (German), Carnegie Hall, the Apollo, for many NBA games, and the Pittsburgh Pirates 2019 Home Opener. She has acted in three films, and with the Pittsburgh Public Theater stage show, Lights and Legends.

And of course, Brinker truly has a family network that has been her built-in audience since she started singing.

“I actually could tell that she could sing around two or three. She had really good pitch at two or three, and was picking up songs so quickly. She was memorizing entire CDs. When she was six she asked to see a YouTube video on who could sing the highest note, and I showed her that YouTube video, and she declared ‘I’m going to be an Opera Singer’,” Brinker’s mom recently told the hosts of the Bubba Show on Pittsburgh’s 100.7 Star.

Congratulations, Victory! We are rooting for you to go all the way and beyond!