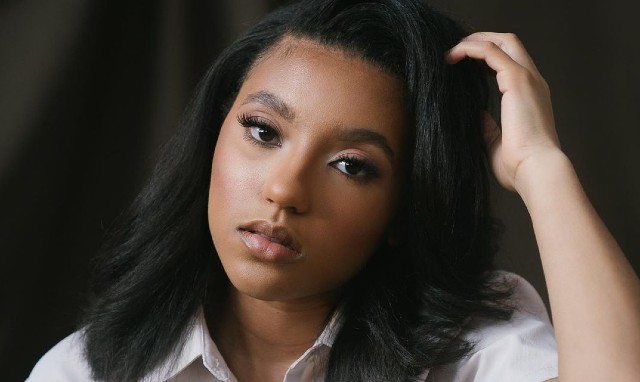 The 16-year-old singer with a big voice, Luna Elle, has not only dropped a new single but the talented young Canadian has also caught the eye of basketball great, Shaquille O’Neal.

The soulful new tune, “Flaws,” has sultry sound that embraces the true R&B style with a topic to match. According to Complex CA and Luna Elle in a recent interview, the song speaks of embracing a lover who doesn’t necessarily fit her idealized notion of the perfect mate, and vice versa.

“In the chorus, I say, ‘Love ain’t nothing like the movies, it’s not always fun.’ I feel like we are so influenced by the media, not necessarily just movies but social media,” Luna Elle tells Complex Canada. “There’s a lot of celebrity couples that you can’t imagine arguing, but they do just like everyone else. So this lyric is a reminder that you won’t always see eye to eye in a relationship and it’s perfectly normal.”

In addition to dropping her newest project, the talented teen is already making big waves in the industry as she is catching the attention of A-listers all around. Recently the baritone crooner caught the attention of basketball legend, Shaquille O’Neal, who shared a clip of her performing on his Instagram with the caption, “@lunaellemusic is next up you heard it here first.”

The Mississauga artist sat down with exclaim.ca for a Q&A session so that fans could get to know her better. Take a look below at a snippet of what she told the popular Canadian outlet.

How did you get started, and what kind of music do you make?

My name is Luna Elle and I’m a 16-year-old singer from Mississauga, ON. My earliest memory singing was at five years old, around the time my grandfather passed; that sadness motivated me to write a song about missing him. Shortly after that, my family supported my music passion by encouraging me to take some singing lessons.

Music became more serious for me after my older sister introduced me to Ken Asafo and Moe Alayan from Hot Freestyle, who put me in the studio and helped me record my first few songs. Since joining their label, we’ve been hard at work as a team developing my sound, releasing music and reaching fans.

I would describe my sound as heavily influenced by R&B from the 1990s and 2000s, because of my sister exposing me to that type of music at a young age. As a vocalist, I’m really drawn to other strong vocalists like Jazmine Sullivan, Brandy and Beyoncé — artists like that really motivate me to be better and inspire the direction of my music.

As a musician growing up in Mississauga, were there any local music spots you loved or musicians who inspired you?

I haven’t really been to many concerts yet because I’m more of a person who likes to consume music from the comfort of my home, but before the pandemic happened, I planned on going to more shows. Hopefully I get to experience more shows now that things are opening back up. Somebody from my hometown that I would love to go see perform is PARTYNEXTDOOR. Seeing an artist like him come out of Mississauga, blow up and achieve all of his success is very inspiring.

How did Shaq find out about your music? How did you learn that he had posted about it and what did that feel like?

Shaq came across my single “True Love” from my label’s Instagram page and sent me a message saying, “May God continue to bless you.” It felt so cool and awesome. I’m forever grateful for his support. My mentions were blowing up after he shared my song.

Have you reached out to Shaq at all since?

We’ve reached out to thank him for the support. It’s something we’ll always remember. Much love, Shaq!

What can you tell us about the EP you’re working on? How do you feel about releasing your first collection of songs?

Releasing my first few songs has been so exciting. At first, I was a bit nervous about how the public would react to my music, but thankfully the reception has been mostly positive. It feels great to know that people actually connect with my music and want me to drop more of it. This motivates me to work hard on my EP.

It’s definitely been fun challenging myself as a writer by exploring different styles of production and unique ways to deliver my vocals on this project. I really want this EP to stand out and make an impact on the scene — that’s why I try to be very hands-on by paying attention to every small detail until my standards are satisfied. I don’t want to say too much about the project, but you can expect very relatable songs about love and relationships. The goal is to drop it early next year and I can’t wait for everyone to hear it!

We have a feeling that this is unquestionably just the beginning for this amazing new rising star. We cannot wait to see where her journey leads.