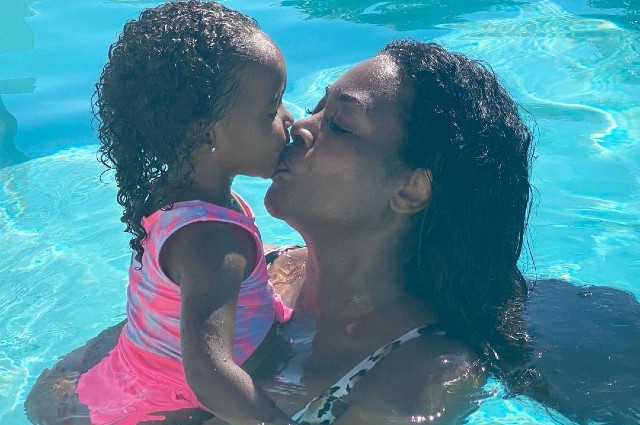 Kenya Moore has been granted permission to show her daughter, Brooklyn Daly, on the Real Housewives of Atlanta (RHOA) despite Marc Daly’s attempts to block such activity. A judge ruled in Kenya’s favor back in June.

Court documents obtained by Radar Online show Marc’s statement in which the restauranteur expressed his concerns over Brooklyn being exposed to the general public through the show. Marc even insinuated that Kenya was placing their daughter in harm’s way by featuring Brooklyn on the show.

Not only did the judge disagree with Marc’s perspective but he also gave a statement that affirmed Kenya as a nurturing mom to Brooklyn. “The evidence has further shown that if Petitioner is not able to involve the minor child, that it could negatively impact her ability to make money, or even be employed,” the judge added in his statement.

Moore was granted the ability to have sole discretion regarding Brooklyn’s appearances on the Real Housewives of Atlanta (RHOA). The celebrity mom was ordered, however, to inform her ex whenever she plans to include their daughter in her storyline and to ensure the content is age-appropriate.

Kenya Moore filed to divorce Marc Daly a few weeks ago. The marriage dissolution did not come as a shock to some as RHOA viewers saw some of the contentions in Kenya and Marc’s marriage play out on the show. Marc initially filed to divorce Kenya in 2019. The couple placed proceedings on the backburner last year in an attempt to mend the relationship.

Kenya, however, decided to move forward with marriage dissolution this year and filed for primary custody of their daughter in addition to filing for a divorce. Some of the general public believed Kenya should have gone through with marriage dissolution after watching Season 13 of the Real Housewives of Atlanta. The Kenya Moore Haircare CEO, however, expressed her desire to make divorce a final resort.

Brooklyn Daly is Kenya Moore and Marc Daly’s only child. The little one celebrates her third birthday this year.