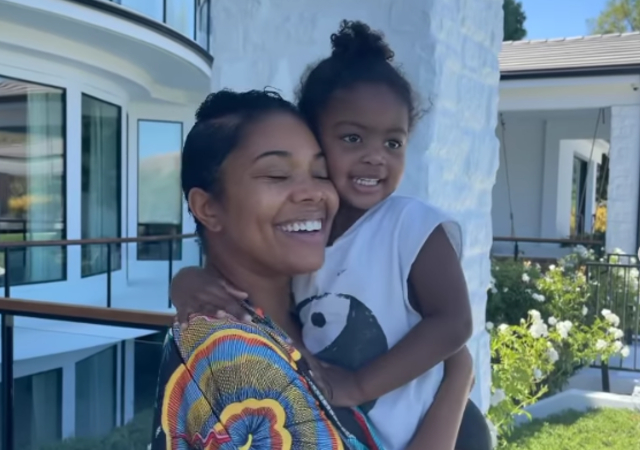 Gabrielle Union wants to teach her daughter, Kaavia James, the importance of self-love. The L.A.’s Finest actress recently gave her daughter a quick lesson about the value of healthy moles.

Gabrielle uploaded the segment on Kaavia’s Instagram page as well as TikTok. In the clip, Union attempts to teach Kaavia to love every part of herself including the moles, or beauty marks, on her body. “Mommy has a lot of moles,” Gabrielle tells her daughter. “I’ve got moles on my face,” the actress added.

Kaavia appears surprised before saying that she, too, has moles. Gabrielle and her daughter ultimately find a mole on Kaav’s foot, which makes the youngster happy that she is just like her mom. “It’s not bothering anyone, so you just leave it,” Gabrielle tells her daughter at the end of the clip.

Nearly one million of Kaavia’s Instagram subscribers loved the lesson on self-love Gabrielle Union conveyed to her daughter during the segment. “I love Gabriel as a mommy,” one social media follower said. “When I tell you that was the sweetest thing,” another supporter said.

Gabrielle Union and her husband, Dwyane Wade, are determined to teach their kids the importance of self-confidence. “I was raised to assimilate,” Gabrielle said during a recent interview with PEOPLE. “I was raised to conform,” she added. “But we are raising our kids to know they are worthy because they exist,” the celebrity mom said. “We don’t want them to ever shapeshift for anyone else’s approval or acceptance. We want them to be free to be who they are.”

Freedom comes in many forms for Kaavia James whose facial expressions have made her famous. Many reference her as “Shady Baby” because of the reactions she gives in certain situations.

“People see themselves in Kaav,” Dwyane Wade said of his and Gabrielle Union’s daughter during the couple’s recent interview with PEOPLE. “Shade is her superpower because when Kaavia gives you a look, it’s either you’re not respecting her boundaries or something is happening that she doesn’t like,” he added. The main takeaway is that she’s free to be this amazing, dynamic, shady at times, loving at times Black little girl when the world has not been so kind to Black girls and women.”

You can learn more about the power of shade when you pick up a copy of Gabrielle Union and Dwyane Wade’s children’s book, Shady Baby, which is available at bookstores nationwide and online.