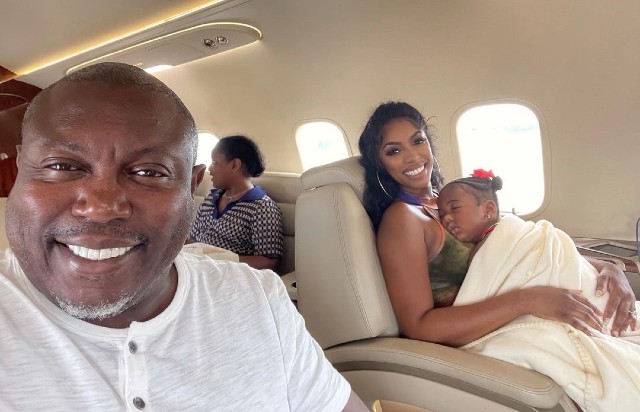 Simon Guobadia views his fiancee, Porsha Williams, as the “best mum yet.” The businessman took to Instagram on Thursday (July 29) to celebrate the former Real Housewives of Atlanta (RHOA) star.

Simon uploaded a picture of Porsha holding her daughter, Pilar Jhena McKinley. The celebrity mom appeared to be traveling with her little one. “Best mum yet,” Simon said of his fiancee. The businessman’s caption caused mixed reactions from both fans and critics.

“Caption is weird asf,” one critic shared. Another wrote, She sure uses the baby as excuses (sic) for so many things. How much time do u spend with her?”

Many did not approve of the way Porsha Williams and Simon Guobadia announced their relationship. Simon was separated, but not divorced, from his wife, Falynn Guobadia. Porsha also had an association with Falynn, which further complicated matters.

Some have accused Porsha of scheming to steal Simon from Falynn. Others, however, continue to defend Porsha and Simon’s right to build a relationship with each other.

“I just love the way he appreciates her,” one social media follower wrote in response to Simon’s post on Thursday. Another fan asked, “Why so much negativity? He chose her and she said yes. He didn’t force her. Obviously, he adores her. Half of y’all will love to be where she is.”

Pilar Jhena is Porsha Williams’ daughter with businessman Dennis McKinley. The former Real Housewives of Atlanta star recently took to Instagram to praise her child’s father for working with her fiance to give their daughter a positive environment.

“Simon and Dennis are committed to being respectful and supportive of my happiness in this situation, as well as being the best co-parents they can be to baby PJ,” Porsha told her fans and critics. “Two black men stepping up and being amazing people – let’s praise them,” Williams exclaimed. “It’s truly a beautiful moment in my life and we cannot wait to spend the rest of our lives together.”

Simon Guobadia has five kids – Quentin, Nicole, Christian, Benjamin, and Ximena – in all. Pilar Jhena is Porsha Williams’ only child.