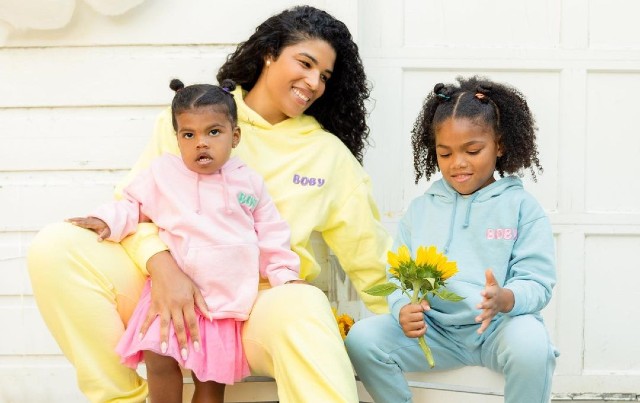 Chance the Rapper’s wife, Kirsten Corley, has a new children’s line that is focused on positivity and, specifically, uplifting children of color. Kirsten introduced her brand, BOBY, earlier this month.

BOBY has a mission to encourage children to celebrate who they are without the fear of shame. According to the brand’s website, “BOBY is a celebration of being exactly who you are. At the intersection of boldness + creativity is where Boby lives.”

Kirsten Corley heavily relied on her background in fashion design and psychology to bring her vision of a unique clothing line for kids to life. “Becoming a mom at the age of 24 set Kirsten on a path to build [a] community for mothers everywhere,” the celebrity mom’s website reads. “Having experienced postpartum depression as a young mom, Kirsten deeply values the power of communal support. Her appreciation for community carries over into her role as a mother of Black daughters.”

“Having faced what is required to raise Black girls, Kirsten founded BOBY to address the ways in which children of color are too often misrepresented or underrepresented in kids apparel. BOBY is Kirsten’s vision for a community that is centered on self-care, identity, and the mental wellness of children and mothers.”

Kirsten does not speak with the public on her life as the mother of two daughters, Kensli and Marli, through interviews too often. The rapper’s wife does, however, regularly share candids of her daughters with her social media fans.

In fact, it was just a few weeks ago that Kirsten uploaded a picture of Marli Grace wearing a sweatshirt from the BOBY clothing line. “My almost 2-year-old,” Kirsten told her social media fans. “So precious,” one supporter wrote after seeing the candid of Marli Grace. “Such a cutie,” another fan exclaimed.

You can learn more about BOBY here!