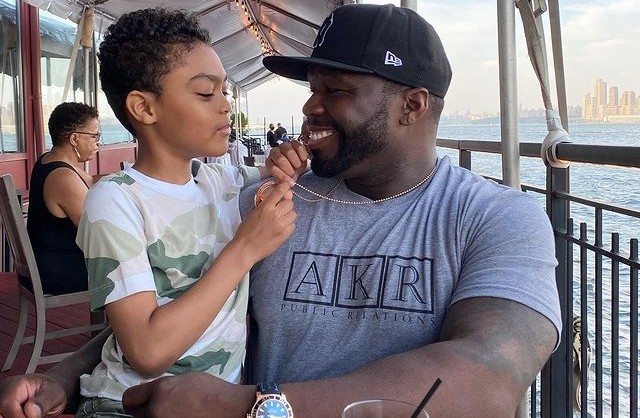 Curtis “50 Cent” Jackson’s son, Sire Jackson, views his father like a superhero. The Power producer recently told the press about his youngest son’s perception of his dad.

“There’s a point where kids view their parents as superheroes because they don’t understand everything else in life that they have to do, work and everything else to create the comforts,” 50 Cent shared with the media. “My little guy now, he sees me like that,” the celebrity father added. “He thinks, ‘My dad could do it – there’s no question my dad could do it’, like if somebody can jump further and he’ll say ‘my dad can jump that far’, he thinks I can do everything, and it’s amazing.”

Curtis “50 Cent” Jackson is the father of two sons. The celebrity’s oldest son, Marquise, is a young adult. Sire celebrates his ninth birthday later this year.

50 Cent rose to fame because of his incredible skills as a rapper. The recording artist went on to successfully produce Power in collaboration with STARZ. Jackson’s latest series in his franchise, Power Book III: Raising Kanan, is significantly based on his upbringing.

“I look at my journey, some of the decisions that my mom made have guided mine,” 50 Cent shared with the press. “It’s because people from her life had what was a representation of financial freedom, they had those nice things in front of me,” the celebrity explained.

“They got everything that you would want, so it kind of led me down the same path of the hustling and going to do different things, and, you know, I just hit the roof of that and wanted to do more, so I got involved in music and entertainment where we do things that exceed that level of success, completely.”

You can catch Power Book III: Raising Kanan every week on STARZ.