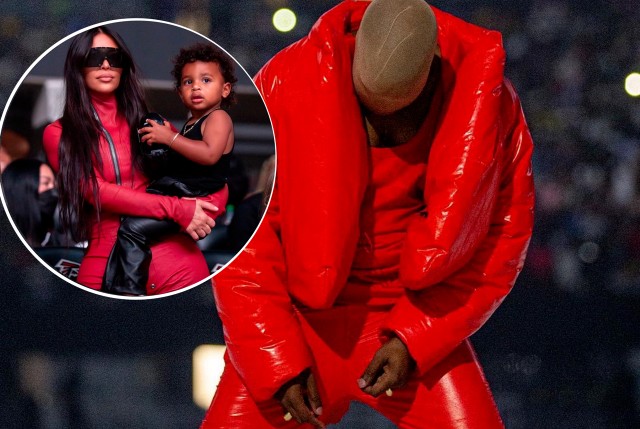 Kanye West is heartbroken about losing his family to divorce. The ‘Good Morning’ rapper fell to his knees at his Donda album listening party while hearing his new song, ‘Love Unconditionally,’ which addresses Kanye’s separation and impending marriage dissolution.

Kanye blatantly tells listeners he is “losing my family” in his song. The rapper withholds nothing when it comes to his feelings about the unraveling of his home life in his forthcoming song.

Kim Kardashian brought her and Kanye’s kids to his listening party at Mercedes-Benz Stadium in Atlanta earlier this week. The Keeping Up With The Kardashians (KUWTK) star watched as her estranged husband cried while on his knees during the playing of ‘Love Unconditionally.’

Kim Kardashian filed to divorce Kanye West earlier this year after nearly seven years of marriage. The KUWTK star was fully aware of her estranged husband’s plans to release a song that highlighted his feelings about their separation before Kanye’s Donda listening party earlier this week.

“Kanye did write a song about Kim and their marriage and Kim gave her input,” a family friend recently revealed. “He was respectful and gave her the heads up, and didn’t want to blind her.”

Kim Kardashian recently shared her feelings about divorce as it relates to her and Kanye West parenting their four kids during the Keeping Up With The Kardashins reunion special with Andy Cohen. “I will forever be Kanye’s biggest fan,” the KUWTK star declared. “He is the father of my children,” she added. “Kanye will always be family,” Kim said.

“We have a great co-parenting relationship and I have so much respect for him, and you know, that was my boyfriend in the first place, for a long time, so I don’t see that going away,” the celebrity mom concluded.

Kim Kardashian and Kanye West have two sons, Psalm and Saint, and two daughters, North and Chicago, together. Donda is set to release on August 6, 2021.