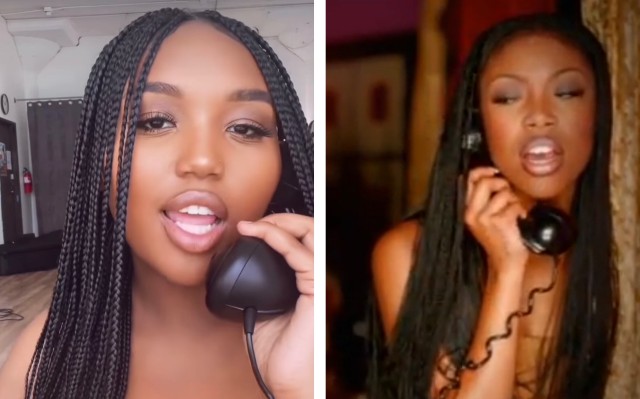 Brandy’s daughter’s latest TikTok has gone viral and it is showing no signs of slowing down anytime soon. Nineteen-year-old Sy’Rai Smith took to the popular app to recreate the intro for her mom’s hit song, “The Boy Is Mine”, and it has fans feeling nostalgic. In the video, the teenager is her mom’s twins as she rocks similiar clothing and braids as Brandy did in the original video.

Another wrote, “When they say Copy x Paste they mean it.”

The video also features Smith’s friend, Stella Williams ,who also donned a bob wig and played the role of Monica. The clip currently has over 200,000 views and counting and over 37,000 likes.

If you remember, “The Boy is Mine” original song was a 1998 hit for Brandy and Monica. Back in February, Brandy and Monica also did a their own remake 23 years after the song’s debut on TikTok as well.

The Monica and Brandy recreation came after the two reunited during Timbaland and Swizz Beatz’s Verzuz series. It was the first time that the pair was together in the same room in almost a decade.

Brandy told Monica, “I just need you to know I have the utmost love and respect for you as well…No matter the times where it seemed like I didn’t.”

Monica and Brandy had a rocky relationship that began falling apart in the ’90s. That rocky relationship even turned physical between the two. According to E!, music producer Dallas Austin revealed the pair hadn’t met in person before “The Boy is Mine” and that they recorded parts separately.

He told DJ Vlad, “The first time they actually saw each other to do it was at the American Music Awards or something. Before they could even get to the stage, Monica decked her in the face.”

We are glad that they moved forward and and made their peace, which allowed the doors to open for Sy’Rai’s intro remix. Now that you’ve seen her viral video, what do you think…is the remix better than the original? Sound-off and comment below. We want to hear from you!

DABABY AND KIDS CELEBRATE HIS MOM'S BIRTHDAY IN TURKS AND CAICOS

DABABY AND KIDS CELEBRATE HIS MOM'S BIRTHDAY IN TURKS AND CAICOS