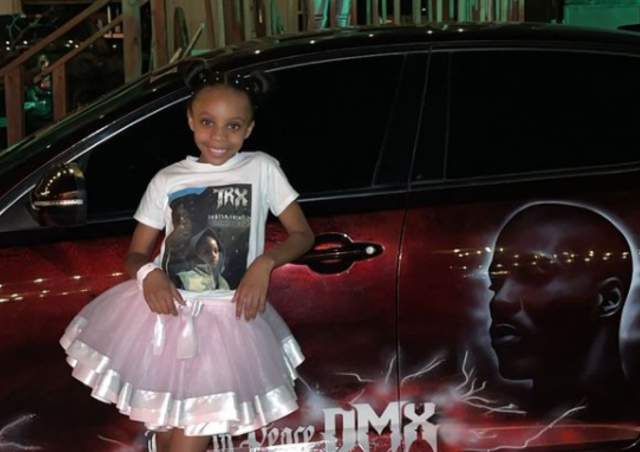 DMX’s daughter, Sonovah Hillman Jr., is moving her career as a rap artist forward. The youngster gave her first concert at the Wildcatter Saloon in Katy, Texas, this past weekend.

“Thank you so much @wildcatter_saloon,” Sonovah shared after her show. “I won’t ever forget you giving me the opportunity,” the little one wrote online. “My first concert,” Sonovah gushes. “Forever grateful. Big thank you and shout out to Justin, John, Carmen, and Scott. When I make it big I’m coming back. I promise.”

The Wildcatter Saloon booked DMX a few months back. The rapper was supposed to give fans a show on Saturday (May 29), according to the saloon’s schedule, but passed away weeks before he could fulfill his commitment. Sonovah filled her late father’s shoes at the venue.

“That’s Dmx soul,” one fan said in reference to a clip little Sonovah shared with her Instagram fans. “She’s about to take over the world,” the supporter said. Another social media follower wrote, “She looks just like him.”

Sonovah showed courage and skill at her father’s memorial last month. The youngster rendered her version of ‘Slippin’ by DMX. Many viewers credited Sonovah for having the strength to perform at her father’s funeral. She has since moved forward with collaborations for DMX’s posthumous album along with other ventures.

“Whatever is on my mind, I just write about it,” Sonovah said during a recent interview with NBC DFW. “Rapping makes me feel powerful,” the youngster shared. “Someday I want to own a mansion with 15 bedrooms,” Sonovah said in reference to her aspirations for the future.

Sonovah Hillman Jr. has shared a desire to release upwards of 20 songs in the coming months. Go to her Instagram page to keep up with her career.

JAY-Z LEARNED TO SWIM BECAUSE OF DAUGHTER BLUE IVY CARTER