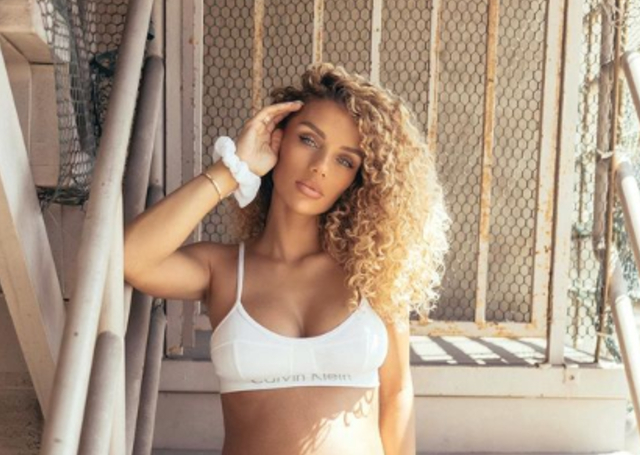 Jason Derulo’s pregnant girlfriend, Jena Frumes, is growing and glowing. The expectant businesswoman recently shared candids of herself that showed off her glow and baby bump.

One candid showed Jena striking a pose while proudly displaying her protruding stomach. Another candid was of Jena wearing a bodysuit that hugged all of her curves. “Stunning,” Allison Holker said of Jena’s series of maternity photos. “So pretty,” another social media follower said.

Jena Frumes and Jason Derulo shared the exciting news of their expectancy a few weeks ago. The celebrity couple revealed the gender of their unborn child in March.

Jason and Jena had an extravagant gender reveal party that included fireworks with family and friends. The celebrity couple took to Instagram to give predictions before the party convened.

“I already know what it is,” Jason told his social media fans. “I think it’s a boy because the stomach’s sitting kind of low and it looks like a ball,” he added. Jena said, “Well, I heard that when you’re clumsy and moody [while pregnant], then it’s a girl. So it’s going to be a girl.” Jason, as it turns out, was right. The recording artist and his girlfriend are indeed expecting a boy.

The pandemic has revived Jason Derulo in more ways than one. Not only has the recording artist used TikTok to gain notoriety from a new generation, but Jason has also released new music for fans to enjoy.

“It feels kind of weird saying it, given everything that’s going on, but I feel younger than ever,” Derulo said during an interview last year. “I feel more inspired than ever. I don’t see any slowing in the near future,” the celebrity shared. “I always feel like a new birth has happened every time I release new music, I feel like a different person. I’m reinspired.”

Jason Derulo and Jena Frumes met at a gym right before lockdowns temporarily closed public spaces. The couple is expecting their son to arrive in the coming weeks.