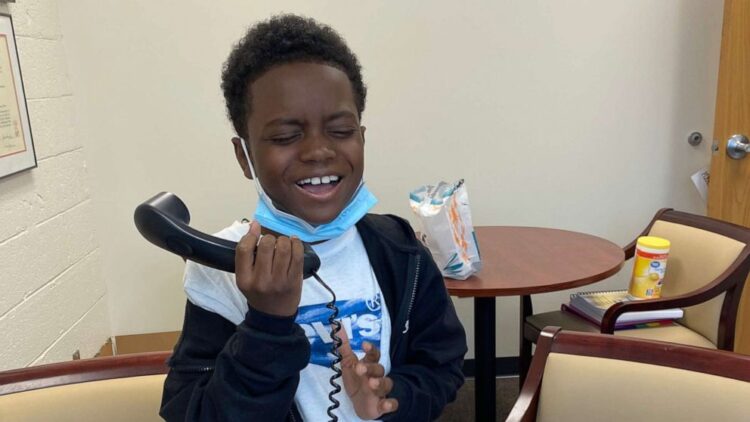 Louisville, KY third grader D’Corey Johnson is gaining viral attention with is voice. The nine-year-old sang the National Anthem and it is jaw-dropping!

Johnson sang the difficult song during morning announcements after asking his principal, Alecia Dunn could he sing the song himself instead of them playing the recorded version.

“He’s so authentic and genuine. There’s nothing rehearsed about him,” Dunn said in an interview with Good Morning America. “There’s no stage child, it is just him. It’s almost like he’s this old soul.”

Dunn admits that when it came time for D’Corey to sing, she was so stunned that she couldn’t finish her announcements.

“I couldn’t finish the announcements. So I just told teachers, ‘You guys can finish out our Bates scholar pledge. You could hear outside the office all the cheers. And then we walked out of my office…it was almost like he was on a parade — every teacher was hanging out their door, we were all crying.”

Dunn, recording the morning performance and posted it on the school’s social media accounts where it went viral and many people commented and continued to share as well.

Wow! What an impressive student with an amazing voice.

And of course, once the media got wind of this amazing young man, his uplifting story and phenomenal talent was shared by all outlets.

D’Corey told GMA that he “loves” singing, adding that he’s a huge fan of Tina Turner and his favorite songs of hers to sing are “Proud Mary” and “River Deep.”

Yet, singing isn’t his only talent. The young man with the golden voice also loves to act and is a fan of, wait for it…Shakespeare.

“I want to be a singer known as a triple threat,” he said to the popular morning news show. “That means that I can do everything — sing, act, tap.”

Word is unquestionably getting around about this young man as he has been tapped to sing the National Anthem at an upcoming Tennessee Titans football game. We cannot wait to see which record label will grab him first.

Congratulations, D’Corey. The future has amazing things in store for you!