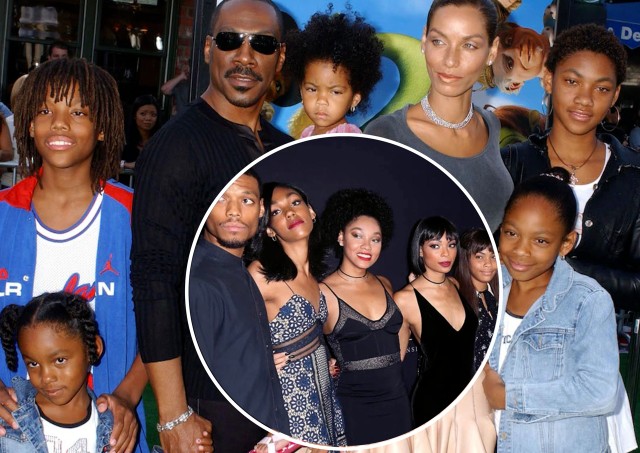 Bella Murphy has been getting a lot of one-on-one time with her dad lately as she made her acting debut alongside her father in Coming 2 America. Bella is the last child that Murphy and Mitchell had, born in 2002. The pair divorced the next year as a result of “irreconcilable differences.”

Miles Murphy was born in 1990 and is the second of the five. He made Murphy a grandfather in 2019 with the birth of his daughter, Evie.

Zola Ivy Murphy, born 1999, is the fourth child of Murphy and Mitchell. Zola Ivy tried out life in front of the camera as she appeared alongside her mother and sisters Bria and Shayne on the reality show, Hollywood Exes in 2014. Like her sister Shayne, Zola is also currently pursuing modeling.

The eldest of the five, Bria Murphy was born in 1989. Following in her father’s footsteps, Bria is no stranger to Hollywood. The beautiful young woman has starred in a number of projects, with the most recent being the 2017 drama Conflict of Interest. She also starred in the reality series Hollywood Exes alongside her mother and sister. Proving that she is the consummate Renaissance woman, Bria is the co-founder of art gallery ArtUS.

Born in 1994, Shayne Murphy is the third child of Eddie and Nicole Mitchell. Shayne appeared alongside her mother and sister Bria on the reality show, Hollywood Exes in 2014 and is currently pursuing a modeling career.