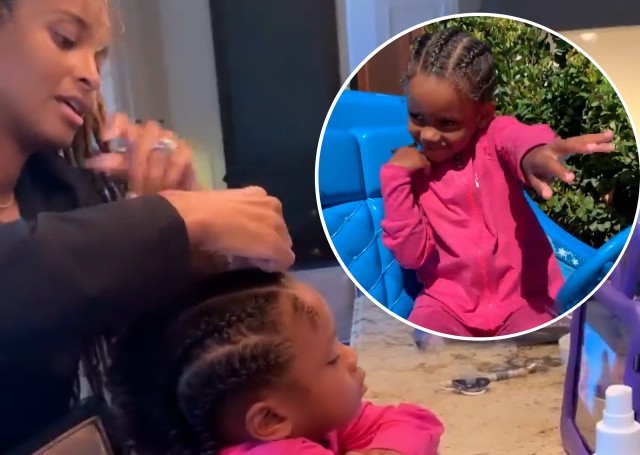 Ciara recently showed off her hair-braiding skills through an adorable video she shared to her Instagram stories.

In the clip, the mom of three can be seen conrowing her daughter Sienna Wilson’s hair. The three-year-old sits quietly watching a cartoon on her IPad as her mom styles her hair.

Later on, Ciara tries to get a picture of her masterpiece only to be met by a finicky toddler, who just wants to drive her toy car.

“Please just give me a smile, CiCi”, Ciara pleads the video clip.

This is not the first time that Ciara has showed of her braiding skills. Last year, Ciara shared photos of her kids, Sienna and Future Zahir, after she had braided their hair. The singer captioned the series of photos , “I used to want to own Hair Salons when I was younger. It’s fair to say doing hair is still one my passions. Mommy’s Braids.”

Sienna Princess Wilson , the first child of Russell Wilson and second of Ciara, will celebrate her fourth birthday on April 28th.

In 2018, Russell spoke of Sienna’s personality at just one year old. He said, “She’s got so much personality… She was dancing to ‘Level Up’ today, and she’s grooving, and I’m like. ‘Man, she’s got better rhythm than me and she’s 1!'”

Three -year-old Sienna still loves dancing and most recently showed off her moves while dancing to Megan Thee Stallion’s ‘Body’ with mom Ciara.

Meanwhile, Ciara has been quite busy at home with homeschooling while caring for a newborn baby. “Life couldn’t be any more hectic than it’s ever been,” the celebrity mom recently shared with the press. “My son is in Zoom classes, and we’re creating an easy plan for my daughter as well with her education,” Ciara added. “There’s so much to juggle and plan.”