"An Idol Of Mine" 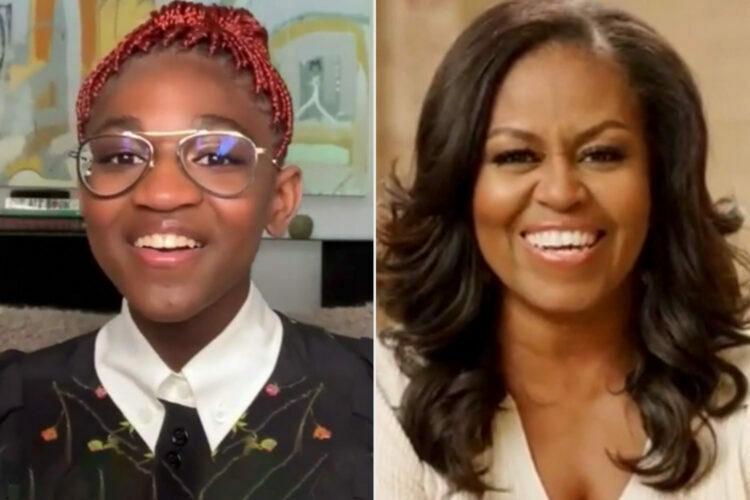 Zaya Wade had quite the conversation with former First Lady Michelle Obama on Thursday (Mar. 4). The teen engaged in beautiful dialogue that revolved around Michelle’s latest Becoming project.

The former first lady decided to create another version of her memoir that is geared more towards young readers after learning many teens and young adults read her book. Zaya was one of those teens who thoroughly enjoyed Mrs. Obama’s story.

“I am just so proud of you being just an amazing role model and embracing your truth,” Michelle said when asked by Zaya for advice on how to be one’s authentic self. “It does take time to know what your ‘self’ is,” the former first lady shared. “So my first piece of advice is [to] be patient with yourself,” Michelle explained.

“In the teenage years, and probably through your twenties, you’re going to be experimenting with so many versions of yourself. All young people are trying on different versions, different voices. They’re learning more about their intellect. They are learning what they love, what they’re good at, what they like.”

Mrs. Obama also suggested that youth get to know individuals with differing opinions. Zaya agreed and gave a story in which she decided to become friends with someone who did not share her way of thinking. The experience, according to Wade, turned out to be positive as Zaya gained a best friend in life.

“So glad I got to talk about Becoming for teens readers with an idol of mine,” Zaya shared with her Instagram fans after the session. “That’s so amazing,” one fan wrote in response to Zaya’s post. Another of the teen’s supporters told Wade she was “so proud” to watch the segment.

Zaya Wade came out as transgender during Pride Month in 2019. The youngster and her parents faced much criticism from individuals who criticized Zaya and accused Dwyane Wade of forcing his daughter into a lifestyle she did not fully understand. Dwyane responded to the scrutiny by revealing that Zaya was well informed while he and his wife, Gabrielle Union, lacked information about his daughter’s lifestyle choice.

Some critics have grown to accept Zaya Wade while others continue to scrutinize the teen. Nevertheless, Wade remains focused on self-love and discovery.

You can purchase Michelle Obama’s Becoming at bookstores nationwide.