"The Joy In Life" 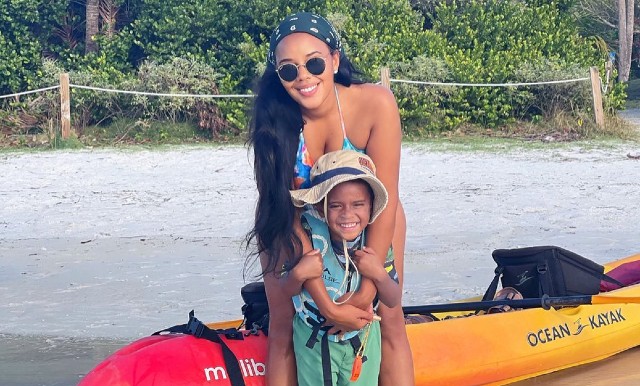 Angela Simmons is a mom above all things. The entrepreneur recently took time out of her busy schedule to hang out with her son, Sutton Tennyson Jr., at the beach.

“I’m mommy first,” Angela shared with her Instagram fans. The celebrity mom went on to give advice to her fans about pursuing their passions in life.

“Find the joy in life; whatever that looks like,” Angela told her social media followers. “Find the moments that are going to make you [the] happiest. You may not have everything you want in (sic) this moment, but with time, and with diligence, and with just figuring it out, you’ll get there,” Simmons encouraged her fans.

“I think that a lot of times we get discouraged, but we have every day to work on ourselves and to decide to make changes,” Angela continued. “And so I just feel like your attitude determines everything. Find a positive attitude and live your life how you want to live it.”

Simmons has been a doting mom since welcoming her son nearly in 2016. The celebrity mom often shares candids of her little one with her social media fans. It was just a few weeks ago that Angela wrote a sweet message about her son on Instagram.

“Took a nap which I rarely do,” Simmons told her social media fans. “And literally woke up to this blessing in my doorway,” the celebrity mom said of her son. “Sunset on his face. (he was literally peaking in at me as I slept). And wow, what a blessing to open my eyes to such a healthy, happy boy. To say I’m blessed is an understatement. Just wanted to say Thank you, God. So grateful to be raising a young King.”