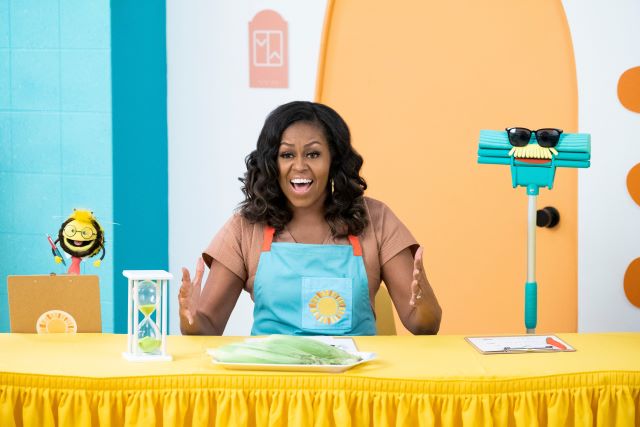 I’m beyond thrilled to share that on March 16, I’ll be launching a new show on @Netflix called Waffles + Mochi! I'm excited for families and children everywhere to join us on our adventures as we discover, cook, and eat delicious food from all over the world. pic.twitter.com/dedUWMp9SY

“I’m beyond thrilled to share that on March 16, I’ll be launching a new show on @Netflix called Waffles + Mochi!,” Michelle Obama tweeted in a recent surprise announcement. “I’m excited for families and children everywhere to join us on our adventures as we discover, cook and eat delicious food from all over the world.”

I’m also excited to work with @PHAnews to help kids build healthy habits and help families in need cook with fresh ingredients together at home. I hope you'll join us by watching on March 16! #WafflesAndMochi 💕

Waffles + Mochi is a continuation of the work that Obama did when she was in the White House. As a part of the “Let’s Move!” campaign, she made it her mission to help end childhood obesity and promote healthy eating.

Per Eater, the show was slated to “take young children and their families around the globe on an adventure that tells us the story of our food.” Reportedly, Jeremy Konner of Drunk History is a co-creator of the show along with actress/producer Erika Thormahlen.

The first original preschool series from Higher Ground, and starring @MichelleObama herself, is coming to Netflix on March 16! pic.twitter.com/vKVaZ3vk2l

In 2018, Former President Barack Obama and the former First Lady, entered into a multi-year agreement to produce projects with Netflix via their production company, Higher Ground.

Waffles + Mochi is scheduled to hit the airwaves on March 6th.

Looking for some tips on how to encourage your kids to eat healthier? Well, check out these top five tips from the experts below.

3. Be a good influence. Kids mimic what their parents do. So, if you are eating healthily, so will they.

5. Be consistent. Make sure that this is a consistent thing and not just a fad. Healthy eating habits take time to develop, but are well worth the journey in the long run.

LAUREN LONDON RESPONDS AFTER NEWSPAPER CLAIMS SHE IS PREGNANT: 'LIES!'