"I Must Have Been Good In A Past Life" 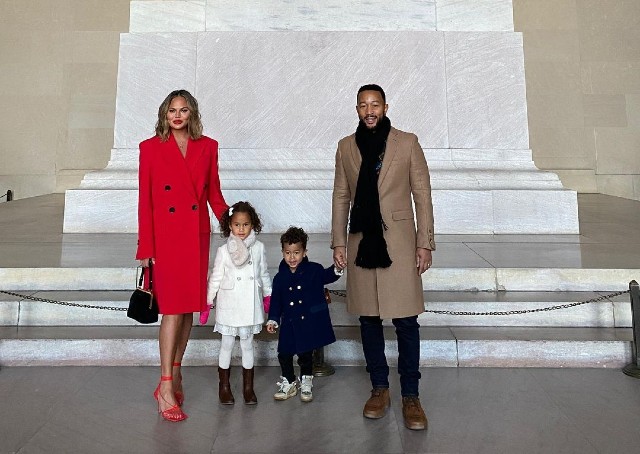 John Legend attended Inauguration 2021 with his wife, Chrissy Teigen, and their kids, Luna and Miles Stephens. The celebrity parents shared pictures from the family’s eventful day in Washington D.C.

“I must have been good in a past life,” Chrissy told her Instagram fans. The cookbook author also uploaded a candid of her standing alongside her husband and kids at the National Mall.

John performed ‘Feeling Good’ by Nina Simone for President Joe Biden on Wednesday (Jan 21). “Thank you for asking me to perform,” Legend wrote to President Biden after his stellar performance. “It was so special for me to celebrate with the nation in front of the memorial to one of our greatest presidents,” John said of singing in front of the Lincoln Memorial. “AND I loved honoring the late great Nina Simone, my constant source of musical inspiration,” the recording artist added.

President Joe Biden was inaugurated as the forty-sixth president of the United States after an election that lasted days due to the coronavirus pandemic. Voting for the presidential election ended on November 3, 2020. The world did not learn about Biden winning the presidency until November 7, 2020, though, because election officials had to count millions of mail-in ballots that were completed by registered voters days before the November 3rd deadline.

Some accused Biden of cheating to win the 2020 election. Such allegations, however, were proved to have no merit by various state supreme courts and the United States Supreme Court, which gave a rather scathing opinion to the Trump campaign about their false claims of widespread voter fraud in the states where Trump lost electoral votes.

John Legend and Chrissy Teigen were among those who came outside to celebrate upon hearing about President Joe Biden’s win. The celebrities were greeted by dozens in Los Angeles who viewed the announcing of a new administration as a sign of hope.