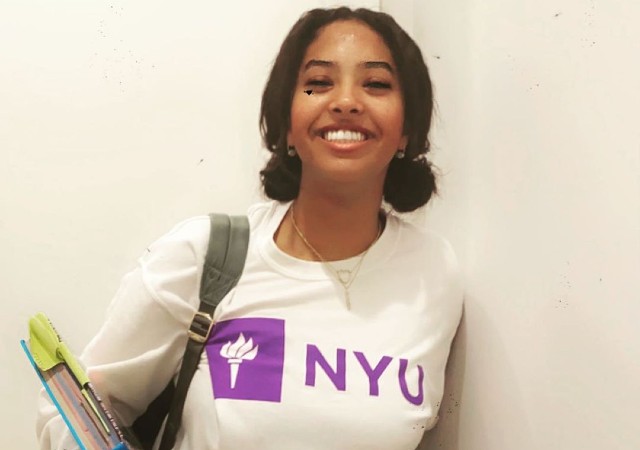 Natalia Bryant is thinking of New York University (NYU). Vanessa Bryant recently revealed the prestigious university in New York City as one of her daughter’s top picks in a social media post.

Vanessa uploaded a picture of her daughter wearing an NYU shirt to her Instagram page on Wednesday (Jan. 14). “So cute,” Bryant said of the candid that showed her daughter smiling while showing off the shirt. “NYU is one of her top schools,” Vanessa told her social media fans. “I will do my best to keep her in Cali just like I kept her daddy here,” the celebrity mom mused.

Kobe Bryant played for the Los Angeles Lakers for 20 years. He was one of few players to start with an NBA team fresh out of high school and never be traded to another team. Many credited Kobe’s ability to play for the same team for two decades as a testament to his hard work. The late basketball player was viewed as a staple to the Lakers and an overall icon in Los Angeles.

It is not clear whether or not Natalia will pursue a collegiate career at NYU. The teen has, however, given individuals going through tough times advice on how to make it through challenges.

“I sincerely believe that the most important thing is to surround yourself with a small circle of people you trust and to be able to express your feelings with them, when you are sad or not feeling well,” Natalia said during a revealing Instagram Story session last month.

“This is also a lot easier said than done but just know that you are never alone,” the teen added. “This is something I have learned throughout this year and still continue to work at (sic) with the help of close family and friends.”

Natalia Bryant is Vanessa Bryant and Kobe Bryant’s oldest daughter. She will join Kandi Burruss’s daughter, Riley Burruss, and other celebrity kids if she chooses to attend NYU in the fall.