Home » NEWS » TEYANA TAYLOR POSES WITH HER ‘PRETTY LITTLE THING’ IN SWEET PHOTO: ‘I LOVE ME SOME HER’

TEYANA TAYLOR POSES WITH HER ‘PRETTY LITTLE THING’ IN SWEET PHOTO: ‘I LOVE ME SOME HER’

"Never Ceases To Amaze Me" 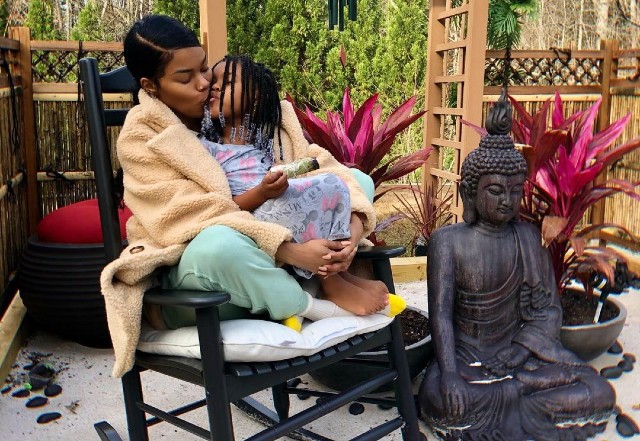 Teyana Taylor is loving time spent with her kids. The celebrity mom recently shared a candid of herself relaxing in the family’s garden with her oldest daughter, Iman Tayla “Junie” Shumpert Jr.

Teyana also uploaded a video clip of her daughter using sage to clear the air. “It’s Junie for me,” one fan said in response to the footage. “She cleanses herself and then went all around.”

Junie Bug has been trending on the Internet since her Instagram Live session in which she called her mom her “Baby Mama.” Teyana was taken aback by her daughter’s hilarious statement. “Get out,” Taylor told Junie.

Teyana Taylor’s oldest daughter will soon celebrate her fifth birthday. Some may recall Taylor giving birth to her first child in the bathroom of the family home.

“On Dec 16th at 6:42 am in our bathroom, Junie decided she wanted to take her first breath into this world,” Teyana shared with her social media fans after her labor and delivery experience. “She came out as a wonderful surprise to everyone,” the celebrity mom said.

Junie is the oldest of two children Teyana Taylor has with her husband, Iman Shumpert Sr. Stay tuned for more celebrity family news!

SOLANGE KNOWLES AND SON JULEZ SMITH LIVE IT UP IN PARADISE

CHRIS BOSH, WIFE AND KIDS HAD A 'NOT SO PERFECT' THANKSGIVING

CHRIS BOSH, WIFE AND KIDS HAD A 'NOT SO PERFECT' THANKSGIVING