PREGNANT KELLY ROWLAND AND SON MODEL BEYONCE’S IVY PARK: ‘HIS AND HERS’ 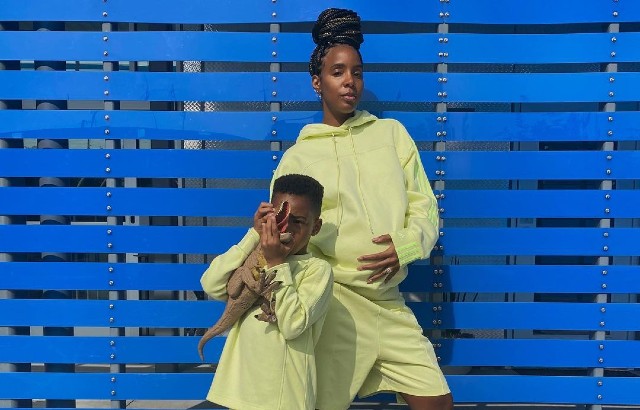 Kelly Rowland and her son, Titan Weatherspoon, are ready to show off their fashion senses. The mother-son duo recently modeled Beyonce’s Ivy Park “His and Hers” styles from the DRIP 2 collection.

“Thank you sissy boo,” Kelly captioned underneath a candid of her posing with her son. The celebrity mom and her little one were wearing matching sweatsuits in the picture. Kelly was sure to cradle her protruding stomach while Titan held onto a stuffed dinosaur toy.

Beyonce’s Ivy Park debuted its DRIP 2 collection last month. The ‘Single Ladies’ singer rolled out the new line with her oldest daughter, Blue Ivy Carter, by her side.

Kelly Rowland and her husband, Titus Weatherspoon, have been quite busy preparing for their second child’s arrival. Kelly recently spoke with Women’s Health about her pregnancy.

“We had been talking about it loosely, and then COVID happened, and we were just like, ‘Let’s see what happens,'” Rowland told the publication. To her surprise and delight, Kelly conceived right away. “I was thinking, Oh my god, my fans are gonna be so disappointed. They wanted an album first, but they got a baby! And I was like, ‘I have to figure this out so they get both.'”

Kelly Rowland’s forthcoming album is still in the works. The recording artist has, however, released a new single, called ‘COFFEE,’ for fans. Stay tuned for more Kelly Rowland pregnancy news!

ARIA BROOKS FROM "ALL THAT" HAS JUST DROPPED MUSIC VIDEO FOR NEW SONG, "AM I NEXT?"

ARIA BROOKS FROM "ALL THAT" HAS JUST DROPPED MUSIC VIDEO FOR NEW SONG, "AM I NEXT?"