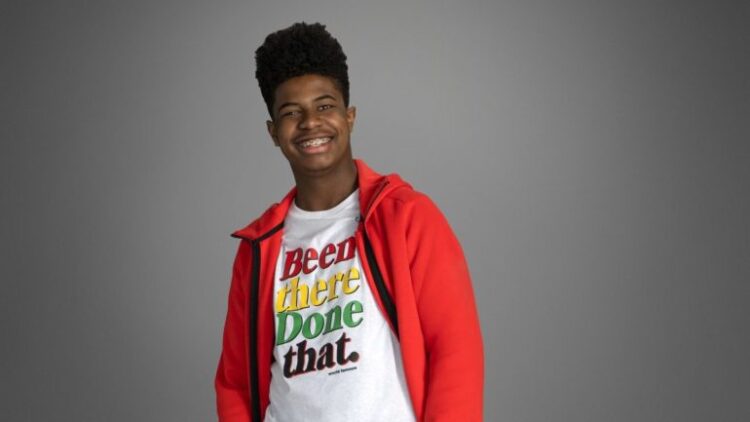 Nickelodeon always has the best shows for kids and teens. And of course, their upcoming November 7th debut of Side Hustle is destined to be a bit hit with Nick watchers.

Isaiah Crews, son of famed actor Terry Crews, stars in the new live-action, multi-camera series Side Hustle. According to Nickipedia, the show follows best friends, smart and sarcastic Lex and confident and tough Presley, as they devise a plan to make money when fireworks accidentally destroy a boat belonging to the dad of their quirky friend and neighbor, Munchy, portrayed by Crews.

Forced to come up with creative ways to earn money to pay for the damages, the best friends enlist the help of Presley’s tech-savvy younger brother, Fisher, to create an app called “Kid-DING” to connect with people looking for help with small jobs. With Munchy’s bossy older brother Jaget making sure they keep up with the payments, the three friends must do any jobs that come their way–no matter how crazy they are.

Isaiah Crews is no stranger to the camera. The fifteen-year-old grew up not only with famed parents, but all of America got to watch the real life action of his family on the BET reality show, The Family Crews.

Isaiah is looking to break out on his own and make a name for himself outside of his famous last name. Side Hustle is his first big break to do so and TV Insider caught up with the young actor to get a first-hand look at his the project and more through his eyes. Take a look at a snippet from the interview below.

When did production get start on Side Hustle?

We started filming the first episode in September. We’ve been powering through the rest of the episodes. Because we started production so late, we don’t have any weeks off. We’re going through the whole season. You find out you landed your first big role and then COVID happened.

Was there any worry that this opportunity might be taken away?

I was absolutely terrified the first time we got postponed. I thought I would never be able to act again and never come back from that. I’m glad the network liked it so much they stuck with it.

When was the moment you decided you wanted to follow in the family footsteps?

When I first saw my dad on White Chicks was when I knew. I thought that job seemed so fun and wanted to do this with my life.

What’s the biggest piece of advice your parents have given you about Hollywood?

The first thing my dad told me was don’t get too big of a head. Don’t let your ego overshadow the rest of your abilities. If you get too cocky, you think you can do anything you want when you can’t. Mainly just stay humble and remember where you came from.

Have you been watching any of your dad’s past projects for comedic inspiration?

I’ve been watching Brooklyn Nine-Nine. It’s actually one of my favorite shows of all time. I was a big fan of Parks and Recreation and The Office, so I’m glad he got to work with people like [creators] Mike Schur and Dan Goor and all those amazing and talented people.

It has been my dream to see any of my family members make it big. I just love entertainment. Watching other shows that my dad has been on is helping me develop comedic timing. Learning when to hold for laughs, which is important on a sitcom.

To read the remainder of Isaiah’s interview, click here. Make sure to tune in and catch his new show, Side Hustle. It definitely looks like it’s going to be nothing less than hilarious.