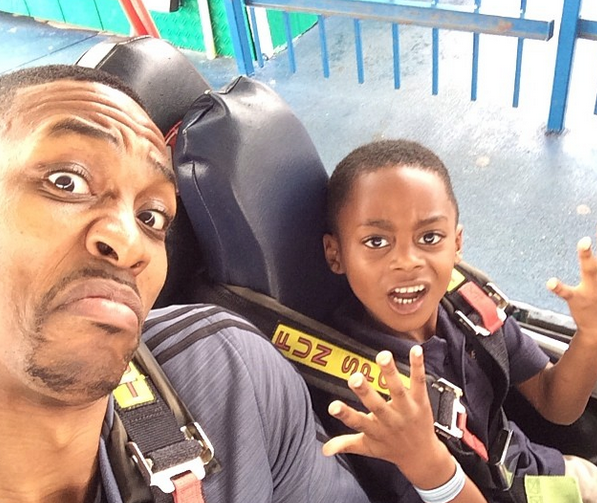 NBA star Dwight Howard is fresh off his first NBA title with the Los Angeles Lakers, helping them to their 17th NBA Championship win. However, since he has five children with five different women, even his Championship win couldn’t stop the ‘baby mama’ drama, as his ex Royce Reed dragged him after the Lakers win, calling him out for neglecting their 12-year-old son Braylon Howard. To make matters worse, Braylon himself took to social media to blast his father for being absent in his life.

Dwight Howard recently called into The Frank Ski Show with Nina Brown on WHUR 96.3 to say his piece, denying the claims that he neglects his children. Dwight explained that “there’s no way he could be a deadbeat dad” since he lives with his 6-year-old son David Howard, who he had with his late ex Melissa Rios. As for Braylon, Dwight maintained that he’s “always been a great father” and that he loves Braylon dearly and spent time with him before the 2020 NBA season restarted.

“I’m not the person to get online or go through the media and bash anybody… The only thing I will address is the issue of anybody thinking I’m a deadbeat father,” said Dwight. “Currently, I have a child with me now. My son lives with me. There’s no way I could be a deadbeat dad if I have a son that lives with me. The situation with my other son, it’s unfortunate that a lot of things have been made public.”

“But even before this season started back up, he lived with me for three months. He stayed in my house, we woke up every morning, we worked out together, we ran together, we ate together,” continued Dwight. “We did everything together. He followed me around the whole house. It was the most time me and him have spent just like that because there was no basketball season.”

“So you know, a lot of the stuff that’s being said, you know I hate it and I hate that it’s our own people making it seem as though I’m somebody that I’m not. I’ve always been a great father,” says Dwight.

“Is there areas of improvement? Of course, just like there is in life, with basketball, with anything that I do. I can always get better. I’ve never been that type of person. I lost one of my son’s mom– passed away earlier this year. I was given the responsibility to have my son with me full time,” said Dwight. “He really has changed my life. He inspired me. He was one of the biggest reasons why I was able to go out there and do whatever I had to do to help this team win the championship. He had to see the right example every day, so there’s no way I could be this person that people are trying to say I am.”