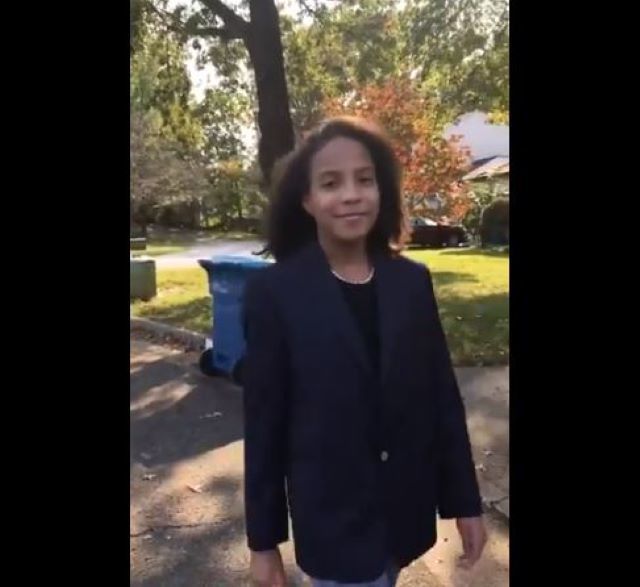 Halloween is right round the corner. Despite having to do things differently this year, many kids are still looking forward to dressing up and that includes 11-year-old Virginia girl, Celeste Lewis.

The preteen had one of the most unique costumes of the year as she dressed up as Democratic Vice Presidential candidate, Kamala Harris.

Lewis donned a blue blazer, pearl necklace, and high heels, just like Harris, walking confidently around her family’s driveway as if it were the debate stage.

“I want to help all the American people,” Lewis proclaimed to her mother as she filmed, playing the role of a reporter. “I want to deliver health care for all, equality and justice under the law.”

And of course, the internet went wild with approval of the costume.

Lewis even got the seal of of approval from the Democratic Vice Presidential candidate herself.

She has my vote. Tell her to keep leading.

“She has my vote. Tell her to keep leading,” Harris posted on Twitter in response to the video.

Lewis’ video has unquestionably gone viral and has been viewed more than 733K times, in addition to having appeared on news outlets such as BET and Good Morning America.

“It was a moving moment for me,” she said in a recent interview. “When I was 11, I didn’t have anybody standing on that American political stage, not at this level. So it’s certainly, for me, moving history forward.”

Harley-Lewis goes on to say that her sole purpose of posting the video of Celeste was to express gratitude to Harris who is the first Black and Asian American woman to be nominated for Vice President by a major party.

“I threw it out in the ether and thought, ‘For some, one-in-a-bazillion chance that she sees this, at least I will have said thank you to her,’” she told Virginia news outlet WDVM. “That’s what it was about: ‘I’m grateful. Thank you for giving us a good role model ― being a good role model ― and representation matters.’”

So, if your little girl is still looking for a costume idea for Halloween, this one might just be at the top of the list for 2020!