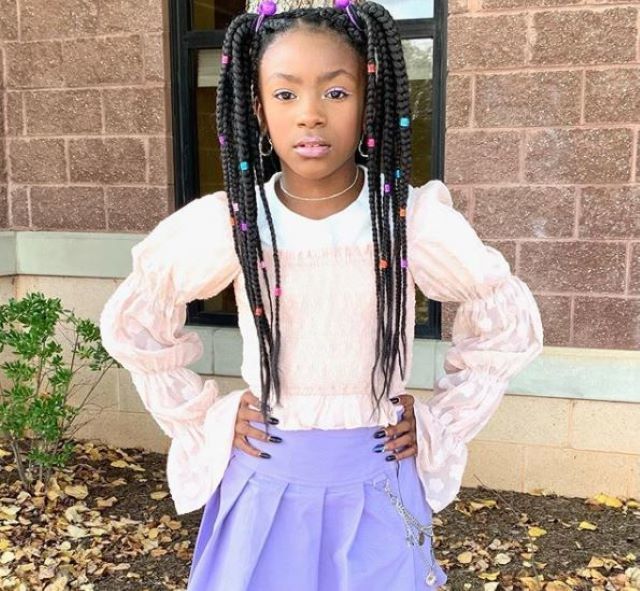 If you haven’t heard of Bri’anna Harper, listen up, because this young rising star is unquestionably making her mark on the world of music, so much so, she is hitting the studio with music legends like Alicia Keys.

Twelve-year-old Bri’anna recently went viral doing a duet with her uncle Joseph Clarke after the pair posted a video of themselves singing a rendition of “Ain’t No Mountain High Enough,” catching the attention of other noted Hollywood A-listers such as Whoopi Goldberg and Kristen Bell.

“It was very surprising how many people viewed it and shared it and enjoyed it. But it was very unexpected so I just thank God for all the views, shares, love and joy,” Harper said in an interview with 7News.com regarding the video that she posted of she and her uncle, who works as a vocal coach and sings with a group called Resound. Resound is currently competing on America’s Got Talent.

And spreading joy through song is definitely Harper’s calling as she continues to do so with her “sis” for millions on TikTok.

In her upcoming album teaser, Harper portrays a young Alicia Keys. Keys could not be more excited to share such a special project with this amazing young lady.

“I’ve had the vision of this teaser for so long! I wanted to create a piece that represents my journey to ALICIA. It’s me coming back to myself & remembering who I am. Who I’ve always been. Even when I couldn’t see it. IT feels good to be here now and to fully express myself through this beautiful music! BIG love to Bri’Anna for playing mini Alicia. She is an amazing soul with an incredible voice!! She’s destined for beyond the stars! So grateful to share my musical journey with you!”

To talk more about her upcoming project, “Alicia,” Keys sat down with NPR’s Audie Cornish. Here’s a snippet of her interview below. To read it in its entirety, click here.

Audie Cornish: I’ve heard you describe this album as some of your most truthful, most authentic music. I think for people who already describe your music that way, why do you think this one is?

Alicia Keys: I just feel like I have gotten to know myself much better than I ever did before. We all have many sides to us, and I think in a lot of ways we get used to only showing a particular side, or one version. And I’ve been really personally interested in going even deeper than that — and getting to know the parts that I’m not comfortable connecting with as readily as the parts that I am.

Is there a song on this album that speaks to this idea that you’re talking about?

One of the ones I’m thinking of now, that’s a favorite for me, is called “Authors of Forever.” What I really love about this song is, it goes on to talk about how we’re “builders” and we’re “breakers,” and we’re “givers” and we’re “takers.” I think that at one point in my life I was like, well, why do there have to be any takers — why can’t it just be builders? Why does it have to be any breakers — why can’t it just be givers? And I realized that you have to have all these sides. You can’t have one without the other.

One of the things I think is excellent about this album is the way that it’s speaking to the moment everyone’s in. The most obvious example might be “Good Job,” which is a kind of message of encouragement to people who are struggling. When I first heard it I was like, “Oh, she’s speaking to me.” And then I realized, oh, right — obviously, there are health care workers and other people in far more intense positions.

I mean, that’s the part that I think has been the most fascinating to me: I wrote that song almost a year ago, when no one would have ever in a million years imagined that the world would be the way that it is now. And it was really for people like my mother, people like you, people like my dearest friends, who really work so hard to keep it all going together, and a lot of times wake up and just feel like, “I’m not even doing it right.”

I just realized, a lot of people don’t hear the words “good job.” Nobody’s sitting there telling them, look, just waking up again and putting one foot in front of the other is a good job. You’re doing your thing. Look how you’re taking care of your daughter, or how you’re juggling two jobs, or how you’re dealing with whatever emotional state you’re in. So it put me in awe to recognize that during these times, the song did apply to all of those people, as well as the essential workers and people who have become so important to our daily existence.

BLUE IVY'S MAKE-UP SKILLS WILL BLOW YOU AWAY