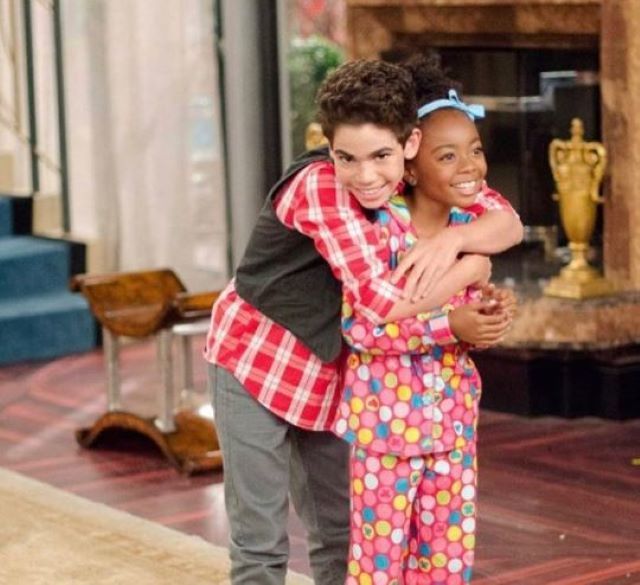 Skai Jackson has been phenomenal on this season’s Dancing With the Stars and in last night’s performance, the talented teen took her performance to the next level as she paid tribute to her late Disney costar Cameron Boyce.

Jackson received her first 10 of the season from Carrie Ann Inaba as she foxtrotted across the dance floor with partner Alan Bersten.

Reflecting on her friendship with Boyce, the 18-year-old said that, “He was in my life for half of my life, which is crazy. I met Cameron, obviously, on Jessie, and we just really built this bond for years and years and years. And he was kind of like a big brother figure to me. He always looked out for me through everything. He really molded me into the person that I am now. Of course I miss him every day,” said Jackson, who began to cry. “But I have him on my phone case, so I get to see him.”

Jackson admitted that she was “a little bit sad, of course,” that Boyce was no longer here to watch her in person; however, she does know “that he would be really proud of me. I know that he loved Dancing with the Stars and he loved dancing. So that’s why I’m really excited, just to do this dance, because it is for him.” She “just wanted to show him that this dance is for him.”

And of course, she did just that, earning an almost perfect score for her performance to John Legend’s “Ordinary People.”

The judge’s comments on Jackson’s dance unquestionably were a reflection of just how amazing it truly was.
“Skai Jackson, last week I said it wasn’t my favorite. This was my absolute favorite dance of the night,” said Derek Hough. “I mean, it was just exquisite.”
“I was blown away by that just now,” said Carrie Ann Inaba, who later added: “First of all, for me, dance is always about the emotion, and I’m sure that Cameron is watching you right now and he is so proud of you. What you did, you were like an angel dancing the most beautiful dance. … It was just sheer perfection.”
Bruno Tonioli made similar comments, calling the dance “stunning. It was the embodiment of grace and elegance.”

Jackson told host Tyra Banks at the end of her performance that she hoped that she had made Boyce proud. We think she did without a doubt.
The 20-year-old Boyce, who had epilepsy, died of a seizure in his sleep on July 6, 2019. Boyce played opposite Jackson in Disney’s Jessie as her adopted brother, Luke Ross.
Post Views: 3,887
Tags: Cameron BoyceDancing with the StarsSkai Jackson
ShareTweetShareSend
Previous Post