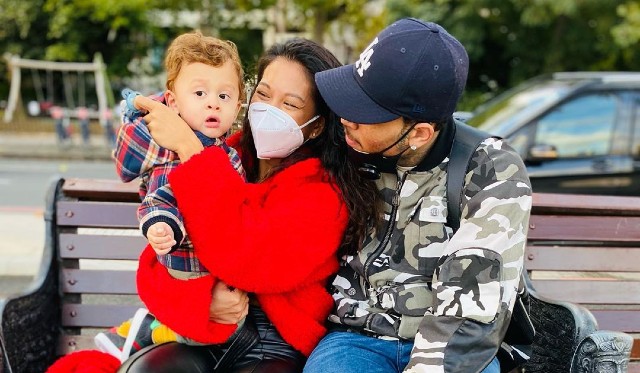 Chris Brown hasn’t been able to see his baby boy Aeko and on and off girlfriend, Ammika Harris, in months, but that all changed this week. The singer flew out to Germany to visit the pair. He posted a photo of the encounter on his Instagram with the caption, “Made it”.”

Fortunately for him, Brown’s ex-girlfriend and Aeko’s mother Ammika Harris makes sure that he is kept up to date about their adorable son by sending him a plethora of photos.

After a secret pregnancy, Chris and Ammika welcomed Aeko into the world on November 20, 2019. Although the former couple broke up before Aeko’s birth, they have since maintained a friendly relationship. Aeko is Ammika’s first child and Chris Brown’s second. He also has a daughter, 6-year-old Royalty Brown, who he shares with his ex-girlfriend Nia Guzman.

Like her father, Royalty loves to dance, and she also enjoys playing soccer. As with Aeko, Chris Brown posts about his daughter Royalty heavily on his social media. In fact, Chris Brown dedicated his seventh studio album to his daughter, naming the 2015 album ‘Royalty’ after her.

T.I. AND TINY'S DAUGHTER, HEIRESS HARRIS, SINGS AT THE TOP OF HER LUNGS IN CUTE VIDEO

T.I. AND TINY'S DAUGHTER, HEIRESS HARRIS, SINGS AT THE TOP OF HER LUNGS IN CUTE VIDEO