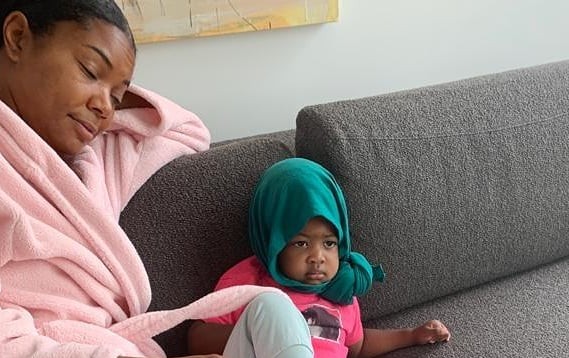 1-year-old Kaavia Wade is an Internet darling, known as “Shady Baby” for her sassiness and hilariously expressive faces. She proved it with a hilarious new photo with her mother, actress Gabrielle Union.

On Kaavia’s Instagram account (which her parents run), she posted a cute photo of Gabrielle sleeping while Kaavia sits next to her wearing a head wrap with a hilariously bored look on her face. The caption reads: “I thought I had more time before I had to start babysitting the old girl. Poor thing. And I’m pretty sure this is how headwraps work.”

The fans in the comment section found the photo hilarious and chimed in. “This baby has definitely been here before. I’m certain of this,” commented one fan. Another fan said: “Honestly, she is literally all of us after watching the debate. We aged 10 years.” A third fan said: “The captions always got me. But trying to read the caption and looking at Kaav’s face at the same time is killing me.” One more fan commented: “She is hilarious, look at her expressions!”

Gabrielle Union shares Kaavia with her husband, NBA legend Dwyane Wade. Recently, Union and Wade were both honored with spots on the 2020 TIME100 ‘Most Influential People’ list. Union shared how much she enjoys seeing her children live freely in an interview with TIME. “We have a daughter that is almost 2, who the world has seen is bound to nothing but whatever is in her heart and on her soul at the moment and it’s beautiful to watch truly free children,” Union said.

Gabrielle Union and Dwyane Wade credited their daughter, 13-year-old Zaya Wade, for their spots on the TIME100 list. In February 2020, Zaya came out as transgender, changing her name from Zion to Zaya. Wade and Union have defended Zaya’s sexuality in the past and have not hesitated to support her (and the LGBTQ+ community by extension) since she came out.

“We have another daughter who is 13, who has freedom to be exactly who she is, who she was born to be, to be her most authentic self. She doesn’t ask permission to exist,” says Union. “That is wildly inspiring.”