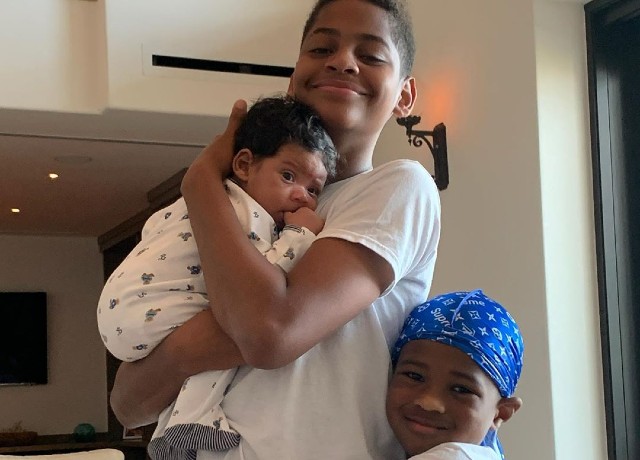 Ciara, La La Anthony, Vanessa Bryant, and their kids are vacationing together at an undisclosed location. The longtime friends have been playing games and enjoying their time together.

One humorous clip shows Ciara playing football with La La, Vanessa, and Natalia. The ladies got together in a huddle and La La gives instructions on the play. “I’m about to run ‘Danger Danger.’ When I say ‘hut,’ you get that motherf—ing ball and you run,” said La La, which made the group laugh. “Got that, Koko?” joked Vanessa to little Capri, who was standing by.

The song, “California Love” by 2Pac and Dr. Dre started playing as the ladies ran several plays against Kiyan and Future Zahir. The ladies ended up winning and celebrated with hilarious victory dances. Natalia captioned the video on her Instagram: “The Girls Taking The W… As We Should@ciara @lala @vanessabryant.”

Besides their football game, the proud mothers shared many sweet moments on their vacation. One cute photo shows Vanessa and Ciara on a private jet breastfeeding their respective babies, Capri and Win, who were both covered in blankets. Ciara captioned the post: “Got Milk?:) @vanessabryant #MomLife 🥰.”

The children also had their adorable moments. One photo shows Bianka playfully trapping Kiyan in a playhouse, which La La captioned, “Kiyan & BB..too cute.” Another candid shows Kiyan putting Capri to sleep “when he thought no one was watching,” which La La said was, “so sweet.”

On January 26, 2020, Kobe and his daughter Gianna Bryant, along with Alyssa, John and Keri Altobelli, Payton and Sarah Chester, Christina Mauser, and pilot Ara Zobayan were tragically killed in a helicopter crash. Gianna was 13 and Kobe was 41 when they passed and they are survived by Vanessa and daughters Natalia, Bianka, and Capri Bryant.

As her longtime friends, La La Anthony and Ciara have looked out for and supported Vanessa Bryant in her time of grief and pain. In fact, Ciara recently spent “Mamba Day” (August 24, 8/24 in honor of Kobe’s numbers) with the Bryant family. La La spoke about her undying support for Vanessa to ET in September.

“I’m a real friend, that’s what friends do. You don’t dip out on your friends when it gets really hard. And she’s going through something that is unimaginable, that, you know, I can’t even fathom what that feels like,” said La La. “I’m always going to be there for her and the girls and just, you know, want to see her just continue to be strong and amazing. To see her smile and laugh to me is the greatest feeling.”

17-YEAR-OLD WIG MAKER GIVES BACK TO KIDS WITH CANCER