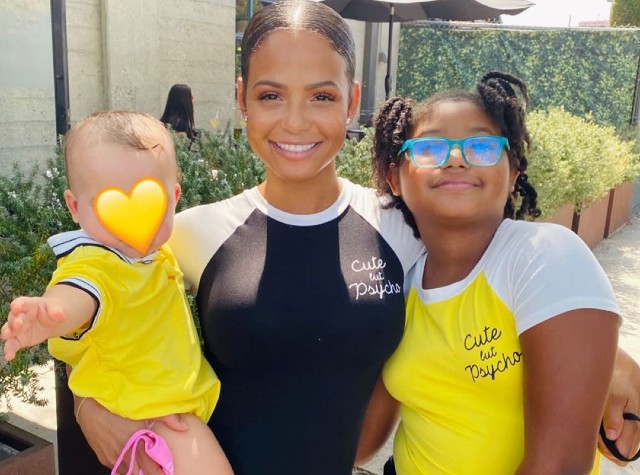 Christina Milian is under fire for covering her son Isaiah Pokora’s face while leaving her daughter Violet Nash’s face uncovered in a recent candid. The backlash mainly came from fans who supported Christina’s second expectancy from start to finish.

In the picture, Christina holds Isaiah while standing beside her daughter. The celebrity mom smiles while posing for the candid outside a restaurant at Venice Beach. “Cute but … We’ll go 🤪👶🏽🤪 for the little guy,” Milian captioned.

Many commented on the cuteness of the picture that showed Christina with her kids. Equally so, some complained about the celebrity mom choosing to place a heart emoji over Isaiah’s face while leaving Violet’s face uncovered.

“Why share every detail of a pregnancy only to keep the baby hidden,” one critic asked. “We’ve invested so many belly pictures and can’t see the face,” the supporter said. “Just stop half posting and just keep the child off social media altogether,” Christina’s Instagram follower declared. Another fan said, “You can show one kid but not the other.”

Bring on the nostalgia!! Remember wearing @Oshkoshkids? Their overalls were a favorite of mine, and this staple is coming full circle with a new limited-edition Capsule Collection. To celebrate 125 years, the iconic brand just released vintage-inspired overalls and tees for adults for the first time in 15 years, as well as sizes for little ones so my kids can match too. Head to OshKosh.com/oshkosh-125birthday #ad

Christina Milian and her boyfriend, Matt Pokora, welcomed their son earlier this year. Isaiah’s arrival made Milian a mom for the second time and Matt a father for the first time. Violet is Christina’s daughter with rapper The-Dream, which is why some pointed to cultural differences when speaking on the recent backlash.

“The fact is that there is two different culture here,” one fan said in defense of Christina not showing her son’s face while letting her daughter’s face go uncovered in her recent photo. “In the U.S., famous people are used to showing their child since Day One in most of the cases,” the social media follower shared.

“In France, this is completely different there are laws to protect them from the paparazzi,” Christina’s supporter continued. “So about 95% of famous people in France don’t show their child face until a certain age … sometimes never.”