TEYANA TAYLOR AND IMAN SHUMPERT CELEBRATE AT THEIR BABY SHOWER 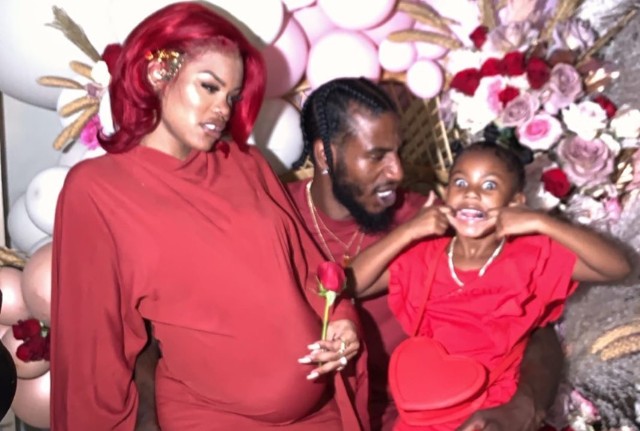 Teyana Taylor and Iman Shumpert celebrated the impending birth of their baby girl at their baby shower on September 5, 2020. The duo, along with their daughter Iman Shumpert jr., wore red in honor of baby girl Shumpert, who will be named Rue Rose.

The bohemian style event was created with social distancing in mind as it was held outside. Guests were also given masks to put on, but many opted to remove the facial wear when taking pictures .

Back in June, Teyana revealed to Nick Cannon Radio on Power 106 that Erykah Badu will be delivering her second child.

“I’m considering home birth and I’m actually gonna be doing it with Erykah [Badu],” Teyana said. “You know, I feel like if I did it once without any type of warning, I could do it this time fully prepared. Giving birth like that was scary but it was such a powerful thing.”

Taylor famously gave birth to her daughter, Iman “Junie Bug” Shumpert Jr., in the bathroom of her home. Junie’s arrival came with little warning as Teyana was on the phone with her mother the moment her water broke. Iman Shumpert Sr., with the help of a 911 operator, delivered the couple’s first-born daughter. Teyana and Iman held their wedding ceremony in their home’s bathroom months later as a symbol of where their baby girl’s life outside of the womb began.

The Shumperts will meet their second child any day now.

THIS IS HOW JALEEL WHITE CELEBRATED HIS DAUGHTER'S 11TH BIRTHDAY

DRAYMOND GREEN AND HAZEL RENEE ARE EXPECTING THEIR FIRST CHILD TOGETHER

DRAYMOND GREEN AND HAZEL RENEE ARE EXPECTING THEIR FIRST CHILD TOGETHER