"Keeping Her Eye On Mama!" 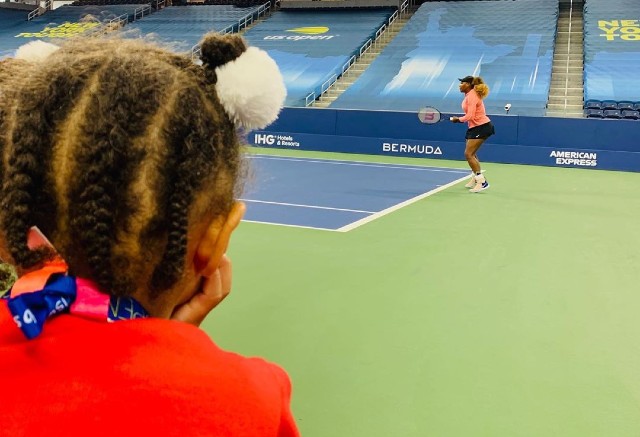 Serena Williams’ daughter, Alexis Olympia, is her biggest fan. The youngster was one of many to cheer her mom to victory during Serena’s U.S. Open match earlier this week.

The day was extra special for both Serena and Alexis as Williams won her match against competitor Kristie Ahn on her daughter’s birthday. The tennis champion played her way to victory in a fanless arena for the first time because of the coronavirus pandemic.

“It’s quiet, but it’s such a big stadium and there’s the screams and it’s the atmosphere and it’s a Grand Slam,” Serena said after her victory on Tuesday (September 1). “So I’m still as passionate and intense out there,” the star athlete said.

Serena Williams has been passionate about winning her 24th Grand Slam since returning to the tennis arena after giving birth to her daughter. The athlete’s mission to tie Margaret Court for first all-time, however, has been hindered by a few losses. Serena was close to accomplishing her goal in 2018, which was one year after she gave birth to her daughter. The celebrity mom, however, fell short to rising tennis star Naomi Osaka.

Still, even with controversies and challenges, Serena maintains a deep love for the game. “One of these days it [is] going to end,” Williams recently told the press. “I just love being out here,” the tennis star said.