THERE IS ‘NEVER A DULL MOMENT’ WITH TAMERA MOWRY AND KIDS 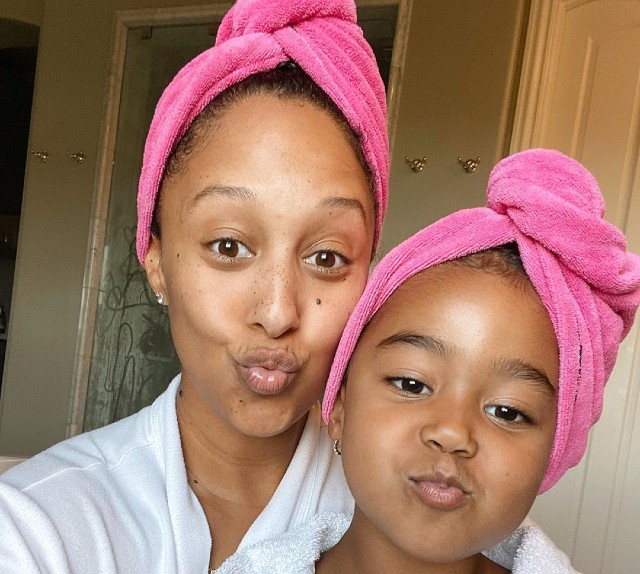 Tamera Mowry is enjoying these summer months with her kids, Aden and Ariah Housley. The celebrity mom recently shared candids of her little ones with her social media fans.

One picture featured Tamera and her daughter, Ariah. The celebrity mom was in the middle of her workout when her “mini-me” decided to strike poses for the camera. “Miss Ariah slowly making her way into my #workout and deciding it was more fun to have a photoshoot,” Tamera said of the series of candids that showed Ariah move from the back to the front of the frame.

Another photo was of Tamera’s son, Aden, who climbed a tree while enjoying the family’s backyard with his little sister. “#MyLittleMan living his best life,” Tamera told her social media fans.

Tamera Mowry announced her departure from The Real a few weeks ago. The celebrity mom expressed her desire to leave the talk show in hopes of spending more quality time at home with her family. The veteran actress has also engaged in projects that involve her kids.

Tamera recently joined her son and daughter in a Lucky Charms campaign aimed at spreading joy through singing. “Couldn’t we all use a little more fun and magic right now,” Tamera asked in the captions section of an Instagram post promoting the singing challenge. “We’re joining @luckycharms and singing Lucky’s song to help him restore the magic to his charms — Because if we all do it, we can unlock something magical,” the celebrity mom said.

LETOYA LUCKETT DESIRES 'PEACE' DURING HER LAST TRIMESTER OF PREGNANCY