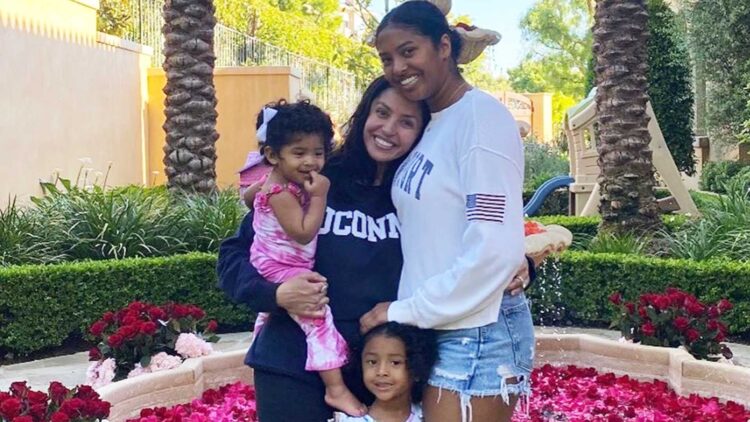 Joining them for movie night was WNBA star Sabrina Ionescu of the New York Liberty, who was drafted No. 1 by them after a stellar college career at Oregon. However, she sprained her ankle in her third WNBA game on July 31 and is expected to be out for a month. Sabrina is close to the Bryant family, as Kobe was her mentor and she trained with his late daughter Gianna “Gigi” Bryant. Sabrina even spoke at Kobe’s public memorial service on February 24. “If I represented the present of the women’s game, Gigi represented the future, and Kobe knew it,” said Sabrina. 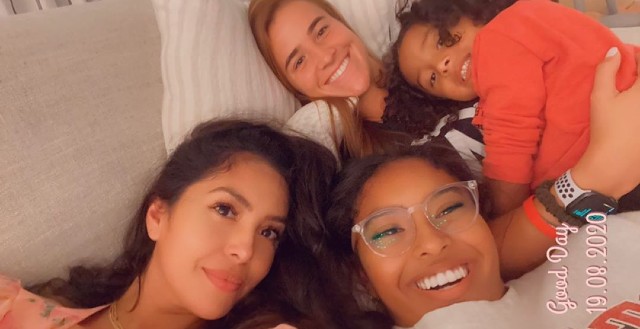 On her (private) Instagram, Vanessa Bryant posted a picture of herself, Natalia, Bianka, and Sabrina all smiling together on a couch and the photo was captioned “Good Day 19.08.2020.” Vanessa captioned the post: “Movie night #killbill #orenishii #CAmountainsnake #blackmamba and an iPad/headphones 😃 🐍 👑 @kobebryant fav 🎥 “VB: Sabrina, wiggle your ankle…” 13 hours later…. tbd ⭐️ #MambaMentality.”

Another adorable photo shows Vanessa sitting with Bianka and Capri as they color on the pavement together with chalk. She captioned it: “This looked way easier on Pinterest. 😁photo: @nataliabryant.” 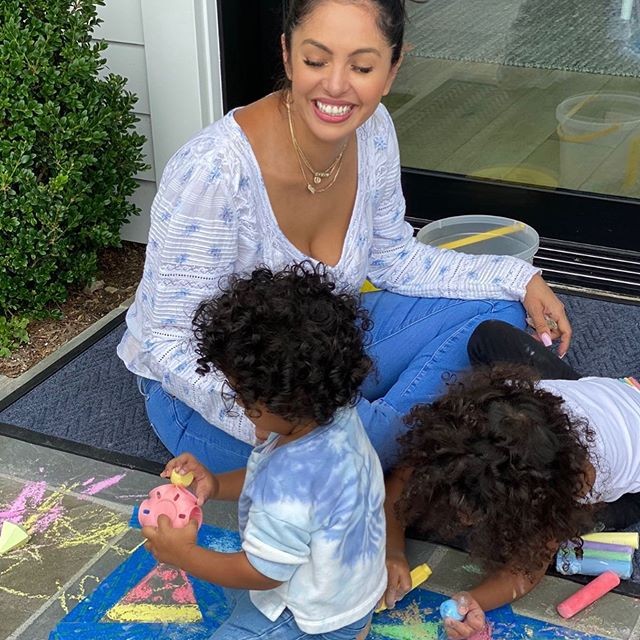 Vanessa Bryant’s movie night comes just a few days before August 23, which would have been Kobe’s 42 birthday. In an official press release, Nike announced they were hosting “Mamba Week,” starting August 23. In addition to releasing Mamba memorabilia, Nike pledged to donate $1 million to the Mamba and Mambacita Sports Foundation, which was created to honor Kobe and Gianna.

Vanessa Bryant also posted photos of the special edition Los Angeles Lakers’ “Black Mamba” jerseys on her Instagram story. The jerseys come in both Kobe’s numbers, 8 and 24, have a snakeskin design after the venomous snake Kobe was nicknamed for, and they feature a white heart with No. 2 in it, which was Gianna’s number. The Lakers will reportedly wear them if they make it past the first round of the 2020 NBA playoffs. Currently, the Lakers are down 1-0 in a best-of-7 series against the Portland Trail Blazers. Game 2 takes place today (August 20) at 9 P.M. (ET) on ESPN.

The photos come almost eight months after Kobe and Gianna Bryant, along with Alyssa, John and Keri Altobelli, Payton and Sarah Chester, Christina Mauser, and pilot Ara Zobayan were tragically killed in a helicopter crash on January 26, 2020. Gianna was 13 and Kobe was 41 when they passed. Gianna and Kobe are survived by Vanessa and daughters Natalia, Bianka, and Capri Bryant.

THERE IS 'NEVER A DULL MOMENT' WITH TAMERA MOWRY AND KIDS