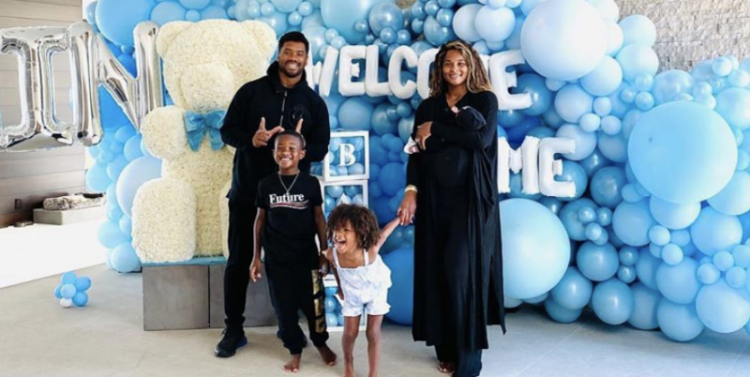 On July 23, Ciara welcomed her son Win Harrison Wilson, her third child, and second with husband, NFL quarterback Russell Wilson, into the world. In a recent interview with ET, Ciara explained the special meaning behind Win’s name, which is quite a fitting one for the son of a Super Bowl champion quarterback and a successful singer.

“That is Daddy. I give credit to Dad. Russell would always be like, ‘Here’s Win shortstop,’ he like, plays a whole thing out,” said Ciara. She then explained that Win’s middle name Harrison came from Russell Wilson’s late father Harrison Wilson III. “And then obviously, Harrison, it was his dad’s first name, which is really sweet and precious,” she continued. “There was a lot of love and thought put into it. Russ, we would talk about names, and Russ kind of always had this name Win in the rotation, years ago, before we knew we were having a girl. He had all the good names and Win won. So Win is the name and he’s so cute, he’s so precious.”

Just minutes after Win Harrison Wilson was born, Ciara was filmed singing “Happy Birthday” to him, which was later posted to Instagram. In the video, Ciara is exhausted from just giving birth, but she still managed to sing for her newborn son anyway. Ciara discussed the moment in the interview.

“My doc, Dr. Katz, who’s delivered all my babies, he’s like, ‘You guys should sing ‘Happy Birthday,'” she recalled. “I actually sang it to Sienna too. But I was so fried, I mean, the craziest thing is that I literally pushed Win out in like eight minutes. So that was, like, fastest [delivery] I’ve ever experienced. It was really smooth, thank God. But singing ‘Happy Birthday’ to him was really sweet,” Ciara continued. “It was a great joy to be able to do it, to have enough energy to get through it, and sing it. It was really sweet.”

In addition to Win, Ciara and Russell Wilson share 6-year-old Future Zahir (Ciara’s son with rapper Future) and 3-year-old Sienna Princess Wilson. They now enjoy life as a wonderful family of five. “There’s definitely going to be a lot of learning to do because every day is a new day in this era,” says Ciara “But I think as a parent, once you have two, any more after that it’s like you’re ready. A baby has so many milestones and there’s so much to look forward to. It’s a house full of love.”