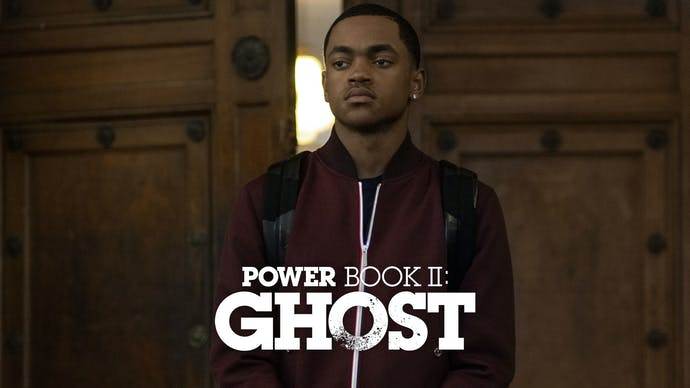 Starring Michael Rainey Jr. reprising his role as Tariq St. Patrick, Book II picks up right where the Power series finale left off, where it was revealed that Tariq murdered his father, James “Ghost” St. Patrick (Omari Hardwick) and his mother Tasha (Naturi Naughton) took the fall for it. While Tariq attends an Ivy League school to earn his inheritance, Tasha faces murder charges for her son’s crime.

To free her, Tariq must team up with cutthroat drug boss Monet Stewart (singer Mary J. Blige) to pay off Davis Maclean (rapper Method Man), a defense attorney who is Tasha’s best chance of getting out of prison. As if that wasn’t hard enough, U.S. Attorney Cooper Saxe (Shane Johnson) has a bone to pick with the St. Patrick family and is determined to prosecute Tasha by any means. To survive, Tariq soon realizes that he must become the next “Ghost” – only better.

“We are thrilled to bring the fans the next chapter of Power with Book II: Ghost. We know they have been waiting too long to rejoin Tasha, Tariq, and other favorite characters as we push into the next phase of their journey,” said showrunner and executive producer Courtney Kemp in a statement. “Power Book II: Ghost throws the fans right back into the action from the start, picking up with Tariq and Tasha 72 hours after the events of Power 615 — and once the ride begins it won’t slow down.”

Executive producer 50 Cent said of Book II: “The Power universe just keeps getting bigger and better and Power Book II: Ghost is getting ready to raise the bar again. We can’t wait for the fans to see what is in store for all of the characters they know and those they are about to meet. I have told you before, Power never ends… we’re just getting started.”

CHRIS BROWN AND AMMIKA HARRIS SHOW OFF THEIR 'FLY' SON

CHRIS BROWN AND AMMIKA HARRIS SHOW OFF THEIR 'FLY' SON