LEBRON JAMES’ SON BRYCE DOES HILARIOUS IMPRESSION OF HIM 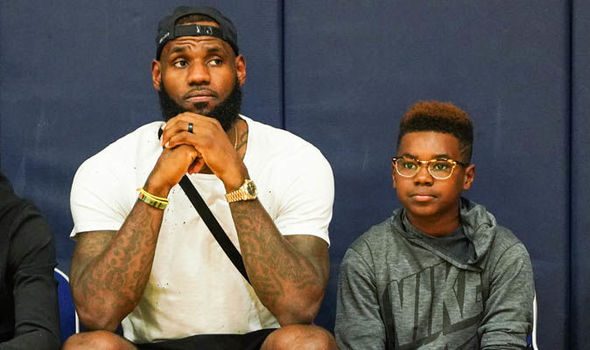 NBA great LeBron James isn’t currently home at the moment, but thanks to his 13-year-old son Bryce James, he’s there in spirit.

Bryce James did a hilarious impression of LeBron in a recent Instagram video posted by his mother, Savannah James. In the video, Bryce imitates his father’s voice and says: “LeBron James. The one and only. The king. The king from Cleveland,” while his big brother, 15-year-old Bronny James, laughs hysterically. Bryce then asked Bronny how tall he is and Bronny responded that he’s 6’2″ in between his laughter. Bryce then said: “6-2? Dang. You 15-years-old and you 6-2? Dang. You were probably 6-11 when you came out the womb. My boy. Yessir.”

Savannah James found Bryce’s impressions of her husband funny, captioning the video, “I’m in literal tears 😂😂😂.” If Bryce James doesn’t become a legendary basketball player like his esteemed father, he’ll certainly have a bright future as a comedian.

While his sons are busy clowning him, LeBron James is with his Los Angeles Lakers in the NBA’s “bubble” in Orlando, Florida as he prepares for the 2019-20 NBA season to restart on July 30; about four months since its March 11 suspension due to coronavirus. 22 teams will play eight games to determine the final playoff spots. The Lakers are currently the No. 1 seed in the Western Conference and are one of the favored teams to win the NBA championship. Each team plays three scrimmages before the season’s official restart. The Lakers had their first scrimmage against the Dallas Mavericks on July 23, the second one was on July 25 against the Orlando Magic, and the third will be today (July 27) against the Washington Wizards.

Although LeBron James was torn about having to leave his family behind, he is certainly glad to be playing again. He posted a few photos of the Lakers’ scrimmage against the Mavericks on his Instagram and captioned the post: “Flight ✈️ 23 back cleared for takeoff! Felt damn good being back out there last night with the Gang! Beautiful game it is! Missed & Love you BASKETBALL ❤️🙏🏾👑.”

Flight ✈️ 23 back cleared for takeoff! Felt damn good being back out there last night with the Gang! Beautiful game it is! Missed & Love you BASKETBALL ❤️🙏🏾👑