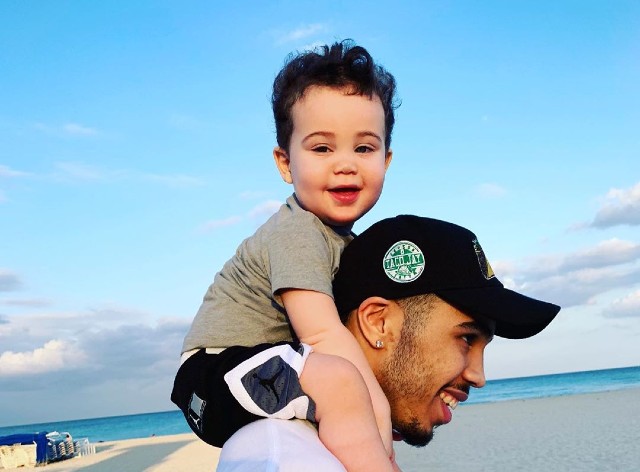 Boston Celtics star Jayson Tatum may be in the NBA’s “bubble,” but he doesn’t let that stop him from reading bedtime stories to his 2-year-old son, Jayson “Deuce” Tatum Jr.

Jayson Tatum reading to his son over FaceTime is so wholesome ❤

Unlike the WNBA, NBA players aren’t allowed to bring their children into the “bubble” until the playoffs in late August. Since he is away from his dear son, Jayson Tatum settled for the next best thing: bringing the same children’s books Deuce has with him so they can read them together each night via FaceTime. Tatum posted pictures of himself reading Brown Bear, Brown Bear, What Do You See? to young Deuce, captioning it “night reads.” SportsCenter’s Twitter even tweeted his photos, writing: “Jayson Tatum reading to his son over FaceTime is so wholesome❤️.”

An all-star caliber player at 22 and a doting father, Jayson Tatum was reluctant to leave young Deuce behind and even considered skipping the season entirely before he ultimately decided to play. “Just being away from my son for two or three months, that’s what’s really bothering me. Knowing that he’s only 2-and-a-half, and especially when they’re that young, their growth, they change every week, just knowing I’m going to miss out on that,” said Tatum. “Missing my mom, my family. It’s been tough. Obviously, I miss playing basketball. I miss competing. But all those reasons and thoughts came to my mind about not going and not playing.”

The 2019-20 NBA season was suspended on March 11 due to COVID-19 concerns, and now it’s set to resume on July 30. 22 teams will play eight games to determine the final Playoff spots, and all the games take place in Orlando, Florida within the restricted “bubble” environment. Each team plays three scrimmages in preparation for the NBA’s restart. The Boston Celtics are currently the No. 3 seed in the Eastern Conference and had one scrimmage on July 24 against the Oklahoma City Thunder. Their second scrimmage was on July 26 against the Phoenix Suns and their third one will be on July 28 against the Houston Rockets.