Home » NEWS » JOHN LEGEND, WIFE CHRISSY TEIGEN AND KIDS HAVE SOME FUN IN THE SUN 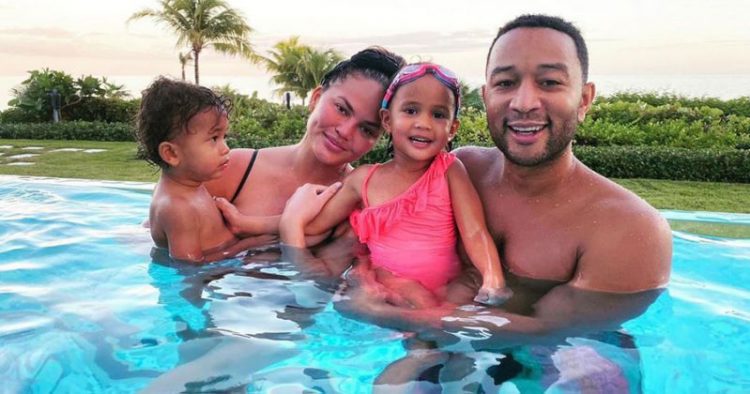 Award-winning singer John Legend, his wife, model Chrissy Teigen, and their kids, recently enjoyed a nice vacation on their yacht in the summer sun.

John Legend and Chrissy Teigen have two adorable children together, 4-year-old Luna and 2-year-old Miles Stephens. The Legend family has been enjoying their time under quarantine together, but this time the family enjoyed some summer fun on the seas and took plenty of Instagram photos to prove it.

On her Instagram, Chrissy Teigen posted a photo of herself, Luna, and Miles on the lower deck of their boat in their swimsuits and captioned the photo, “Hey all you cool…” Another one of her photos shows Legend and young Miles in matching swimsuits on their yacht. She captioned the photo with two bear emojis: “🐻🐻.”

On his Instagram, John Legend posted a few adorable family photos of his own. One photo showed a picture of Miles, wearing upside-down heart-shaped sunglasses, sitting on his father’s shoulders in a pool. The photo was captioned, “Dada’s shoulders!” Legend also posted a picture of himself and his cute daughter Luna together, while another photo showed Legend’s adorable children in their swimsuits.

To celebrate the 4th of July on Saturday, John Legend performed at the 2020 Macy’s 4th of July Fireworks Spectacular on NBC. Wearing a red suit, Legend first performed his hit single “Never Break,” from his Bigger Love album with a choir. Legend later returned to perform the song “Glory,” which he and rapper Common performed for the 2014 award-winning film, Selma. During his performance, Legend gave a short, yet passionate speech about how Black Americans weren’t free when America declared its independence and the need to continue to fight for freedom and equality.

“Today as we celebrate July 4th, when this nation declared its independence, we have to recall that everyone wasn’t free at that time. Too many of our brothers and sisters were not free. The ideals that this nation stands for, we still don’t live up to, We have to keep fighting, keep marching, to get closer to freedom, closer to justice, closer to equality,” said Legend. “We’re gonna keep marching, we hope you keep marching with us. And one day when the Glory comes, it will be ours.”