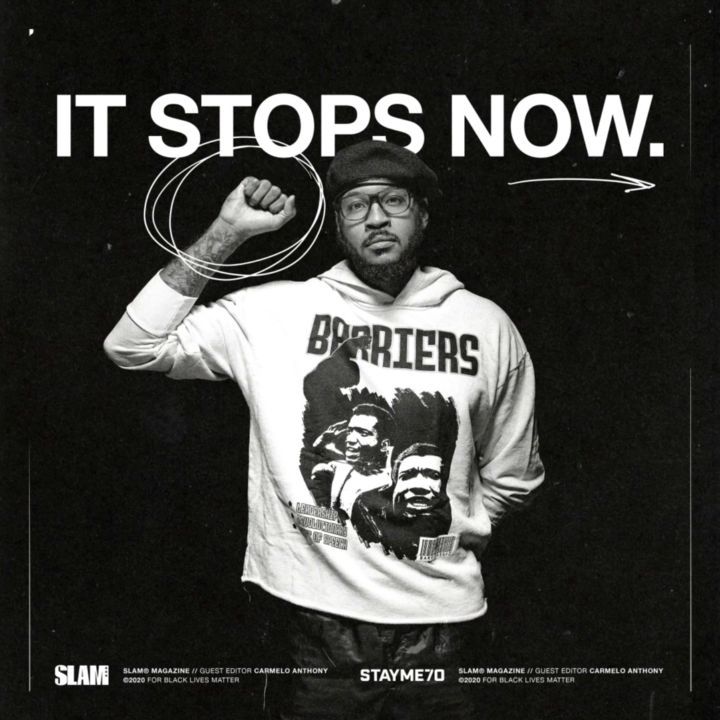 NBA star Carmelo Anthony recently featured as a special guest Editor-in-chief on the July issue of SLAM, appearing on the cover with his 13-year-old son Kiyan Anthony. 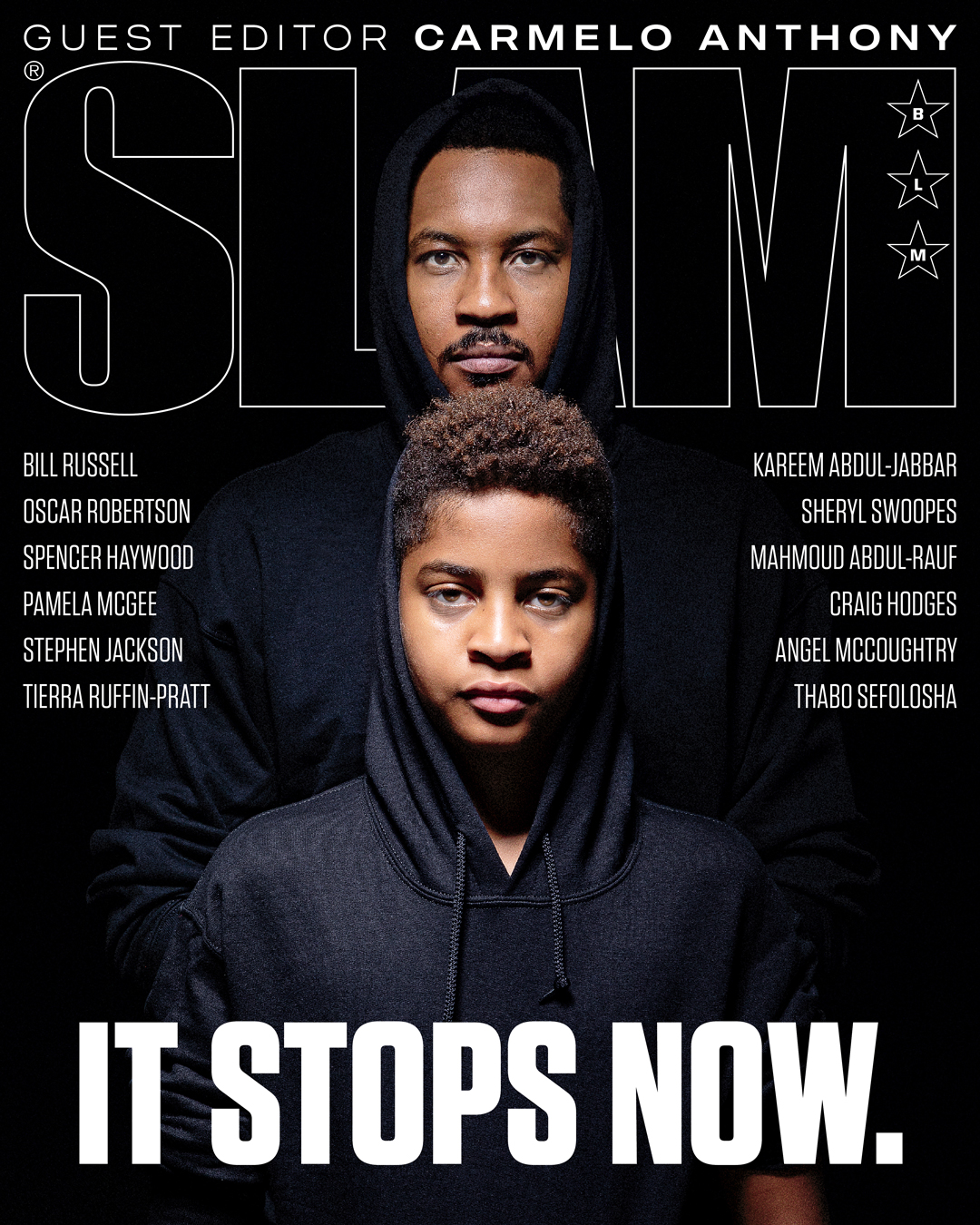 Released on the 4th of July, the July special edition of SLAM features Carmelo and Kiyan on the cover wearing black hoodies, with the words “IT STOPS NOW.” The July issue contains first-person essays from NBA legends such as Bill Russell, Kareem Abdul-Jabbar, and Stephen Jackson; and it features a roundtable with WNBA stars Sheryl Swoopes, Angel McCoughtry, and Lexie Brown.

The magazine’s proceeds are donated to charities supporting issues impacting the Black community, and the special issue contains a passionate letter from Anthony on the evils of police brutality and racism. In his emotionally charged piece, Anthony references some of the words that victims of police brutality have spoken and encourages supporters to continue fighting for equality and justice. Anthony’s letter reads as follows:

Drawing strength from the past. Fighting for justice in the present. Demanding equality for the future. Honored to serve as guest Editor in Chief of this special issues of SLAM. https://t.co/toxsjIZXaT #itstopsnow #stayme7o pic.twitter.com/8FrEAKKRv7

“I CAN’T BREATHE! I STILL CAN’T BREATHE! MY ARMS ARE UP SIR! What did I do? Can you please tell me what I’ve done? Will you ever take your knee off our necks? Is it because I’m Black? Does that scare you? Am I intimidating? What is it? WHAT IS IT? You know what: ENOUGH is ENOUGH,” wrote Anthony.

“’The dark brown shades of my skin only add color to my tears.’—Syl Johnson. I thought by now these walls would have fallen! You’ve probably thought the same thing to yourself as we wait for things to change. It’s called the making of a man which is what the MOST HIGH is doing with our lives,” continued Anthony. “The process is oh so sweet and bitter at the same time! It’s all part of spiritual birth. Now back to the walls! We are in charge of the shaking that seems to go on both around us and in our lives. What we once trusted in seems to crumble. As the Bible says, everything that can be shaken shall be shaken, ‘so that what cannot be shaken may remain.’”

“Pause and think about that. The shaking in our lives causes us to see the HATRED fall by the wayside, and what matters most is still standing! ‘I believe that there will ultimately be a clash between the oppressed and those that do the oppressing. I believe that there will be a clash between those who want freedom, justice, and equality for everyone and those who want to continue the systems of exploitation.’—Malcolm X.” wrote Anthony.

“The mind can be the greatest manipulator if we don’t harness the power within to redirect our energy toward progress. You are judged on how you sustain from pain and redirect that negative energy into power, and that is between you and the Most High! I want you to know that I don’t just speak for myself. I speak for all of us,” says Carmelo. “We have to keep on pushing. We will continue to make progress. We are trying so damn hard. We can’t stop now. Don’t lose focus. Don’t lose sight of why we are in this fight.”