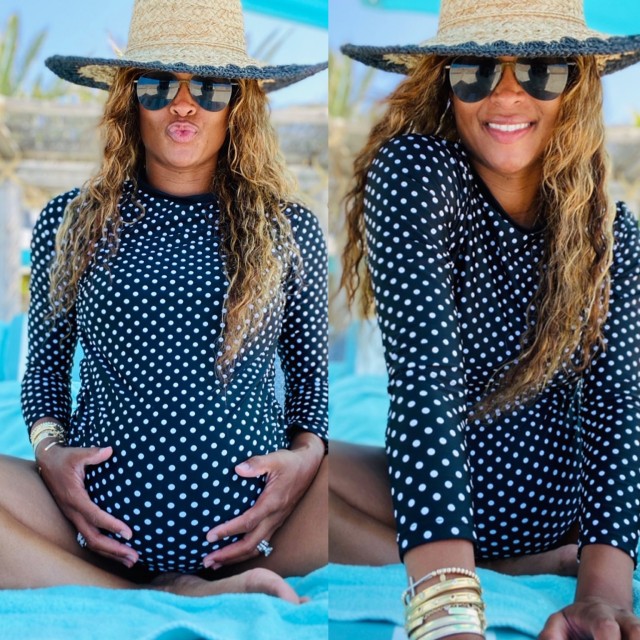 According to her husband Russell Wilson, pop singer Ciara is eight months pregnant. The NFL quarterback recently made a virtual appearance on comedian Kevin Hart’s show, Cold As Balls: Cold Calls, where he spoke to Hart about his expectant wife.

Russell Wilson and Ciara have their daughter, 3-year-old Sienna Wilson, and 6-year-old Future Zahir, Ciara’s son with her ex, rapper Future. On Cold Calls, Wilson discussed what it’s like for Ciara to be pregnant during the coronavirus pandemic, revealing that sometimes he’s not even allowed in the doctor’s office. “We’ve been going to these doctor’s appointments and I can’t even go in the room sometimes just ’cause of the whole process, so that’s been interesting,” said Wilson.

When Kevin Hart asked how many months along Ciara was, Russell Wilson replied that she was “eight months now.” “Oh so you’re in front, you’re in front of me then. Niko’s about six,” replied Hart, referring to his wife Eniko Hart, who is six months pregnant with their second child together, a baby girl. “We get real snappy over here,” joked Hart about Eniko’s pregnancy. “I say, ‘I’m sick of you using this baby as an excuse!'”

Russell Wilson laughed and shared his own story of a date he and Ciara had in the earlier days of her pregnancy. “Ci told me early on. She was two months pregnant. It was Friday night, date night, so we’re trying to, you know, come home the right way,” teased Wilson. “I’m getting all dressed up, ready, and prepared. She says, ‘I’m gonna wear my Uggs.’ And then she says, ‘My feet hurt.’ I wanted to finish the night strong so I said, ‘You know what? I’m gonna rub your feet for the rest of the night,'” added Wilson.

Kevin Hart then joked about Russell Wilson’s calm demeanor. “I’m gonna put a hidden camera in your house. I want to see you and Steph Curry angry. I’m willing to bet it’s some s–t to see,” said Hart. “When we get hot, we get hot!” laughed Wilson.