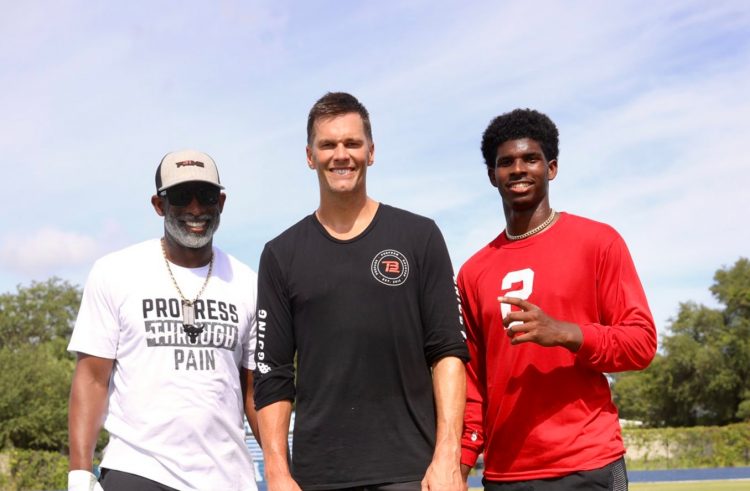 As the son of NFL Hall of Famer Deion Sanders, Shedeur Sanders is afforded the opportunity to train with the best. He made sure to take full advantage, training with the legendary NFL quarterback Tom Brady.

On June 14, Tom Brady put Shedeur Sanders, who also plays quarterback, through a tough workout session, working on accurate throwing and footwork. Shedeur shared photos of his experience on social media, thankful to have learned from one of, if not the, greatest quarterbacks of all time.

Learning from the 🐐 soaking up all the knowledge💯 📸: @striving4_a.lott

On Instagram, Shedeur posted photos of his and Tom Brady’s training, and in the caption, he wrote: “Learning from the 🐐 soaking up all the knowledge💯.” In the comments, Brady responded: “You will determine what your future holds. I’m always here for you.”

Deion Sanders was proud to see his son working out with Tom Brady. In one Instagram post, Deion Sanders posted a picture of himself, Brady and Shedeur at the workout session and captioned the post: “Work + Consistency + Discipline + Time = SUCCESS #Truth.”

In another post, Deion posted photos of Brady and Shedeur’s workout and in the caption, he thanked Brady for taking the time to train his son, writing: “@shedeursanders They’re things In Life even the father can’t teach the son but GOD always provides a way if there’s a will. @tombrady I thank u, appreciate & love the man, the father and the athlete u are. This is NEXT LEVEL TYPE OF STUFF. #Truth PROVERBS 22:6.”

@shedeursanders They’re things In Life even the father can’t teach the son but GOD always provides a way if there’s a will. @tombrady I thank u,appreciate & love the man,The father and the athlete u are. This is NEXT LEVEL TYPE OF STUFF. #Truth PROVERBS 22:6 #GOATTALK #Grown @underarmour @uafootball @tcchfootball @nfl @nflnetwork @striving4_a.lott #2Reasons @welloffforever

Just like his famous father, 17-year-old Shedeur Sanders also takes up football, playing for Trinity Christian High School in Cedar Hill, Texas. Shedeur is quite talented and skilled, as he is a four-star prospect and is ranked as 34th best player in Texas, according to 247Sports. He is also ranked 41st on the ESPN 300 list. Befitting of his rankings, Shedeur has received offers from many colleges, including Florida State, Alabama, LSU and Michigan.