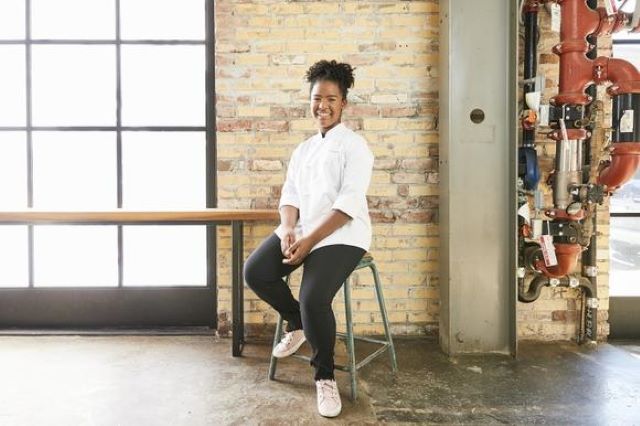 Rahanna Bisseret Martinez is barely sixteen-years-old and has already built a professional resume that seasoned professional chefs twice her age would envy.

Woah!! Thx so much 💞 @kaaviajames @gabunion @dwyanewade Posted @withregram • @kaaviajames Today’s #WCW  is Chef Rahanna Bisseret Martinez, an inspiring 16-year-old prodigy who was a finalist on “Top Chef Junior” in 2018.  Since competing, she has interned at Michelin-star restaurants; stepping up her fierce culinary game. Last week, @rahanna.bisseret.martinez called out the LA Times on Instagram for failing to celebrate black lives that have created the LA food community. Rahanna continued the conversation with a LA Times restaurant critic in an interview about wanting to hear more black voices in food media and for more black food editors, writers, judges, producers, and directors to be paid the same as their counterparts. I want to thank young voices like Rahanna for speaking up against injustice and calling for social change. Thank you for inspiring us and we can’t wait to see you continue to take over the culinary world!

If Martinez’s face looks familiar, that is because she was a finalist on Top Chef Junior in 2018. Since then, the talented young chef has interned, fine-tuning her skills, at some of the top Michelin-starred restaurants, including Californios and Mister Jiu’s in San Francisco, and the esteemed James Beard House in New York. Martinez was invited by chef Emeril Lagasse to cook at his New Orleans restaurants, in addition to cooking with Award-winning chef Nina Compton’s Compère Lapin. Also, she traveled to London and learned how to include modern West African flavors into her repertoire at fine-dining spot Ikoyi.

Recently, Martinez has taken front-and-center in the news not just for her culinary skills, but for her activist voice as she spoke out on Instagram, calling out The LA Times “for failing to celebrate black lives that have created the LA food community.”

Thank you @chefchris512 for opening this conversation and to @holynopales & @latimesfood for giving this a voice. I am just one in the hundreds of years of this work. Excited for our future and the coming legal changes to end discrimination. The future of all people depends on it!! Link in bio

Martinez had the opportunity to sit down with LA Times restaurant critic, Patricia Escarcega, to explain why she feels that more black voices need to be heard in the food industry. Check out her LA Times interview in its entirety below.

You wrote on Instagram that too much of our journalism this week was focused on restaurant property damage.

I don’t think it’s the main topic at hand right now. It seems like sometimes people use it to derail an important subject. The problem is not protesters. It’s racial injustice and police brutality. It’s people dying.

Many people are sharing lists of black-owned restaurants (including L.A. Times Food). How helpful are these lists?

They’re helpful in putting black-owned businesses in the spotlight and allowing them to reach more people. But I also feel that you can’t combat injustice with capitalism alone. We need social change. Also, we can’t just group all black people together. That can kind of pigeonhole black chefs and authors. Not every black chef is going to be speaking or cooking on black topics. We see a lot of European chefs doing Mexican restaurants, Asian restaurants and different things like that. They’re never questioned for cooking different types of foods.

So much good energy from being with ppl that love to cook with nature! @sfgiants @giantsgarden @bonappetitmgt 💖 this organic garden space where students get to learn and cook. I made three salad dressing. Then, the students made composed salads inspired by the dressings and produce from the garden & “farmers market”. . . . . . . #gardentotable #sfgiants #garden #organicgardening #sf #farmersmarket #nature #salad #healthykidsprogram #bonappetit

What are some changes you want to see in food media?

More black food editors and black food writers in 2020. There’s no reason why a food section in any newspaper should be without a black writer, and they should be paid the same as their counterparts. We want restaurant reviewers that are black and understand the complexity of black diaspora foods. We want food and chef events with a multitude of black concepts and leaders. We want to see black people winning, judging, producing and directing televised culinary food programming. We want food media that respects our black heritage foods and all other foods that have been marginalized. I want to see more content for and about black people.

With cookbooks and cooking-related books, we see cookbooks for Italian and French and you know, all different types of Asian cuisines. But there’s never a black foodways or black-related cookbook section. That’s not a filter that you can apply to your search when you’re searching online.

One of the central discussions in food media these days is who is allowed to cook or write about certain foods.

I think in the grand scheme of things, anyone can write about any topic. But the fact that the recipes and culture of many people of color aren’t widely taught, it’s hard to write about things most people haven’t been taught about.

Are you hopeful about change?

I think change can come from both within and outside of publications. I see new publications coming up like For the Culture from the cookbook author Klancy Miller. I do see bigger food companies on social media who have posted a picture of a black square and that’s it, which I feel is an easy way to get people on your side to support you. In the long run, that really doesn’t do anything. A lot of the times what comes with privilege is the ability to not think about these problems. I think we’re at a point now where we can listen to each other.

This is just the beginning for this amazing young lady. We have a feeling that we will be seeing a lot more of her to come in the future!