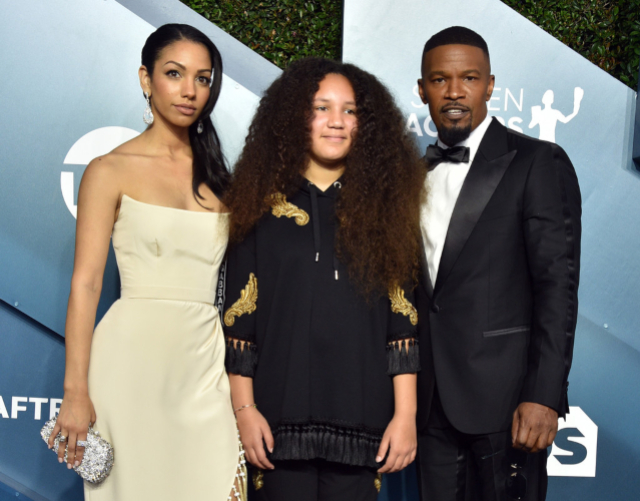 Singer Jamie Foxx recently attended a Black Lives Matter protest alongside his two daughters, calling the experience “bittersweet.” The protest they attended is about two weeks removed from the May 25 death of Minnesota resident George Floyd, who was viciously murdered by Minneapolis police officers.

In the weeks after George Floyd’s death, protests against police brutality and systemic racism have taken place across America and all over the world. Jamie Foxx recently attended one of those protests with his 26-year-old daughter Corinne Foxx and his 11-year-old daughter Annalise Bishop. On Instagram, Foxx posted a few photos of himself and his kids at the protest. In the caption, Foxx shared how proud he was to have his daughters with him, but was heartbroken when he had to explain to his girls why they were there.

Passing it along. Having my kids with me at the protest was bitter sweet. Having them watch the world come together was beautiful… But having to explain to them why we were all there was heartbreaking… let’s change the world so they don’t have to live in it the way we have been… #justiceforgeorgefloyd #blacklivesmatter #swipeleft

“Passing it along. Having my kids with me at the protest was bitter sweet,” wrote Foxx. “Having them watch the world come together was beautiful… But having to explain to them why we were all there was heartbreaking… let’s change the world so they don’t have to live in it the way we have been… #justiceforgeorgefloyd #blacklivesmatter #swipeleft.”

#humanity #justiceforgeorgefloyd #blacklivesmatter this is what love is about

The recent protest with his daughters was not Jamie Foxx’s first time protesting racial injustice. On May 29, four days after George Floyd’s murder, Jamie Foxx traveled to Minneapolis, Minnesota to join a Justice Rally for Floyd at Minneapolis City Hall. Addressing the crowd, Foxx spoke about how people like him were ready to continue the fight against institutional racism and police brutality and offered a message of support and condolences for Floyd’s family. “This is the toughest time when things like this happen. All I wanted to do was let you know that we’re not afraid to stand… we’re not afraid of the moment,” said Foxx. “God bless George and his family.”

A group of us traveled to Minneapolis to be a part of the protests for #GeorgeFloyd and stand with our brother @_stak5_. I believe in being in proximity. We were on the ground in Minneapolis, we traveled to San Francisco and we’re here in LA and the protests have been peaceful and beautiful. To everyone doing the work protesting, speaking, educating, signing petitions, thank you. For those who could only be there in spirit, we documented to let all of you have a glimpse into how beautiful it is when we all come together for a cause, the entire video is up on YouTube. The work doesn’t stop here, don’t lose steam. #BlackLivesMatter #justiceforgeorgefloyd