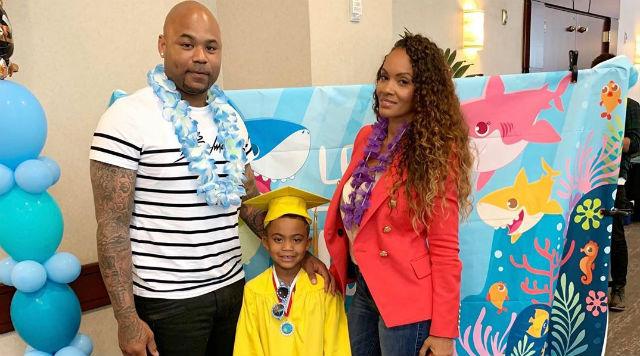 Carl Crawford and Evelyn Lozada’s son, Carl Leo Crawford, has completed Kindergarten and is headed to the first grade! Evelyn took to Instagram last week to celebrate her son’s accomplishment.

“Happy Graduation Day,” Lozada wrote to her son. “On my way to first grade with a fresh new cut,” the celebrity mom said of her little one’s new hairstyle in the TikTok video. Carl Leo was responding to the ‘Don’t Rush’ Challenge, which has been one of many TikTok challenges to sweep the nation during quarantine season.

“I wasn’t ready,” one fan said in response to Evelyn Lozada’s video, Another of the celebrity mom’s followers wrote, “He is too handsome.” Indeed, he is!

Carl Leo celebrated his completion of Kindergarten without the physical presence of his father. Carl Crawford was recently arrested for allegedly attacking one of his baby mamas in front of their 1-year-old daughter.

“Crawford and the victim were together for two and a half years before separating in February. Last month, Crawford reached out to reconnect with the victim, when things quickly turned violent.

When the former MLB All-Star arrived at her Houston home, she says he took out everything from his pockets, including a semi-automatic handgun.

Documents say Crawford fired a round of bullets before walking towards the victim, yelling obscenities while accusing her of seeing another man.

Crawford is also accused of slamming the woman’s head against a wall and choking her until she was about to pass out during an argument.”

OMARION AND APRYL JONES COME TOGETHER FOR THEIR SON'S FIRST HAIRCUT